Again I woke about midnight, 2am, 3am and finally got out of bed around 6. I checked emails and had a response from the JW Marriott in response to a complaint I had sent in the day before. I had explained how we had chosen their hotel ( which we will also stay in while in Beijing) because we felt certain we knew what to expect as far as quality, we had chosen the executive suite level because it offered breakfast as well as drinks and snacks throughout the day and the hotel was also supposed to have spa, workout and pool facilities. We arrived to find they weren’t serving breakfast yet in the executive lounge, none of the spa, pool workout facilities were open yet and the biggest frustration was not being able to easily exchange our money at the hotel because they didn’t have that license yet. None of this was stated at the time of booking, or anywhere on their sight. We had a very nice email from the manage offering to comp a night and allow everyone to eat breakfast in the restaurant on the lobby level of the hotel. He wanted to personally check us out and left his phone number, etc. It was really sweet. Several of the girls and JC got ready and went down for breakfast. They came back saying how fabulous it was and how the manager kept making sure they were ok and he was really wanting Cole to come have breakfast, he even called to the room when the kids said he wasn’t coming. They returned to the room to get our luggage and head down just as our phone rang. It was Rosary saying we had a 2 hour delay. Cole decided he and the boys would go eat after all. While there, Elizabeth realized her retainers ( not even 2 weeks old) had been carried away on her plate. The manager looked for about 30 minutes and finally four them after digging through the garbage. He brought them out to Elizabeth on a plate and she was so excited, without even thinking she grabbed them and plopped them in her mouth…..NASTY!!!! We immediately went and scrubbed both the retainers and her mouth down 🙂

We just relaxed in the room waiting on time to pass. Finally at 11 we headed down and loaded up for the airport. The manager walked us our and was so friendly. He is from the Netherlands and is married to a Chinese woman who lives in Shanghai with their two sons. That is where the international school is and they travel on holidays to see each other. He wasn’t used to seeing many large families like ours and thought I was kidding when I said there were more at home.  We also got a photo with our sweet friend who had escorted us to the bank and Pizza hut!  He was so good to us and wanted to know when we would return. 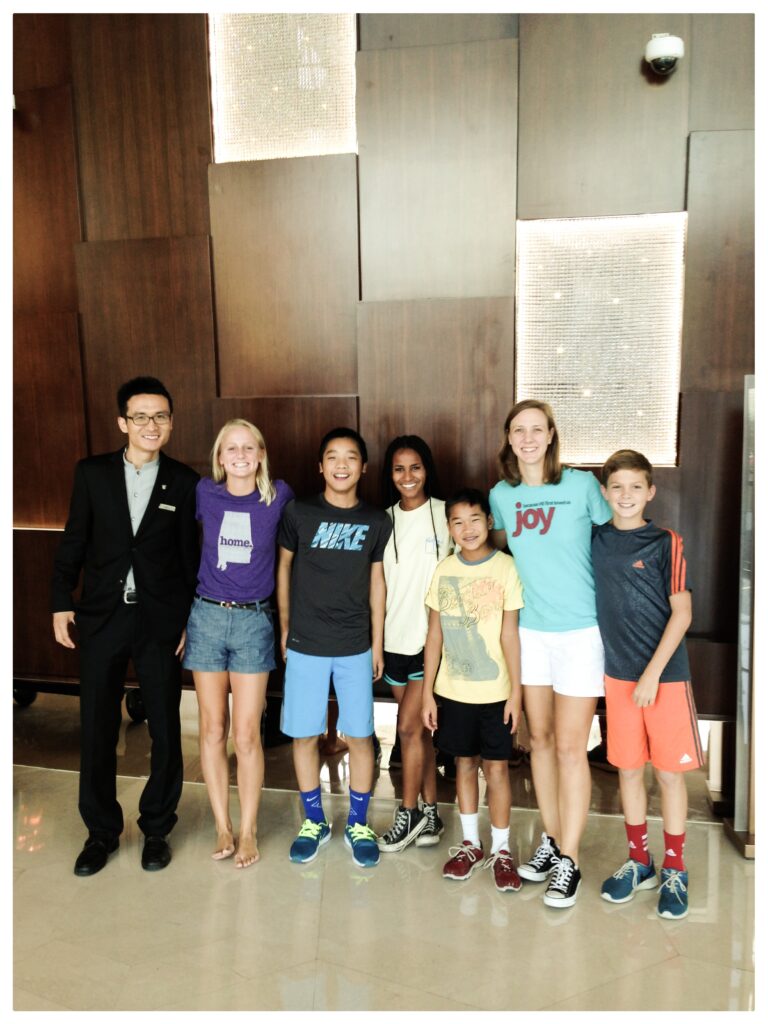 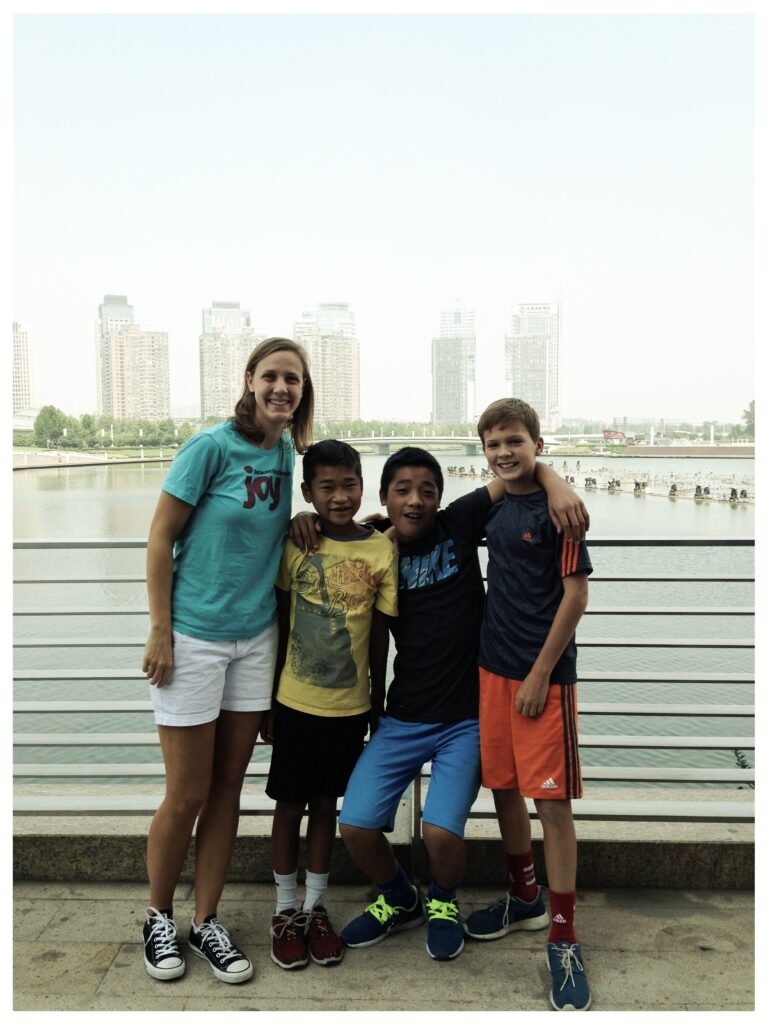 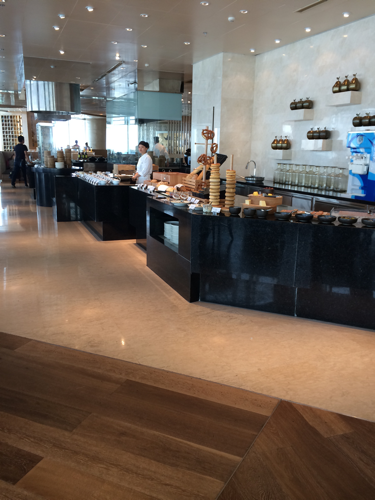 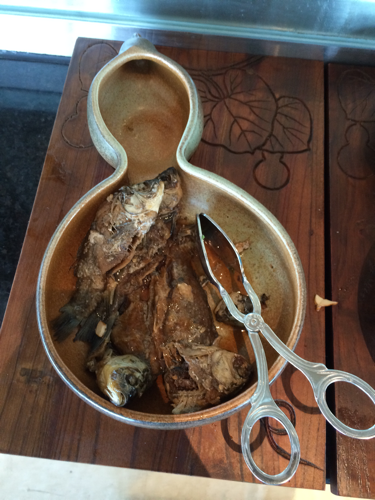 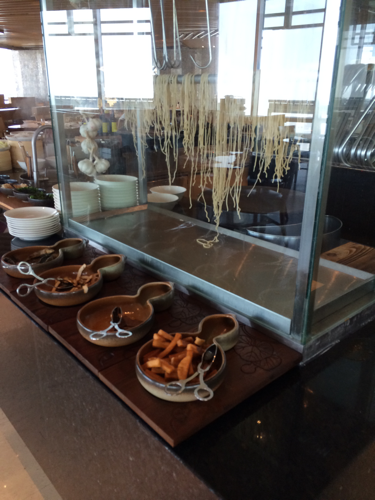 As we drove to the airport we continued to laugh at the complete disorganization of traffic, how there is no road rage and few accidents yet it’s crazy! There are really no rules for the motorbikes and they drive in all lanes in all directions. On the same roadway to the airport we passed tractors, mopeds, bikes, trucks, busses, construction vehicles, walkers, carts…. all seamlessly weaving in and out of one another.

We arrived at the airport, which is under construction and looks like it will be growing 4-5 times in size. We got checked in easily, said goodbye to Rosary and made our way through security. Cole & Zoe had quite a pat down. 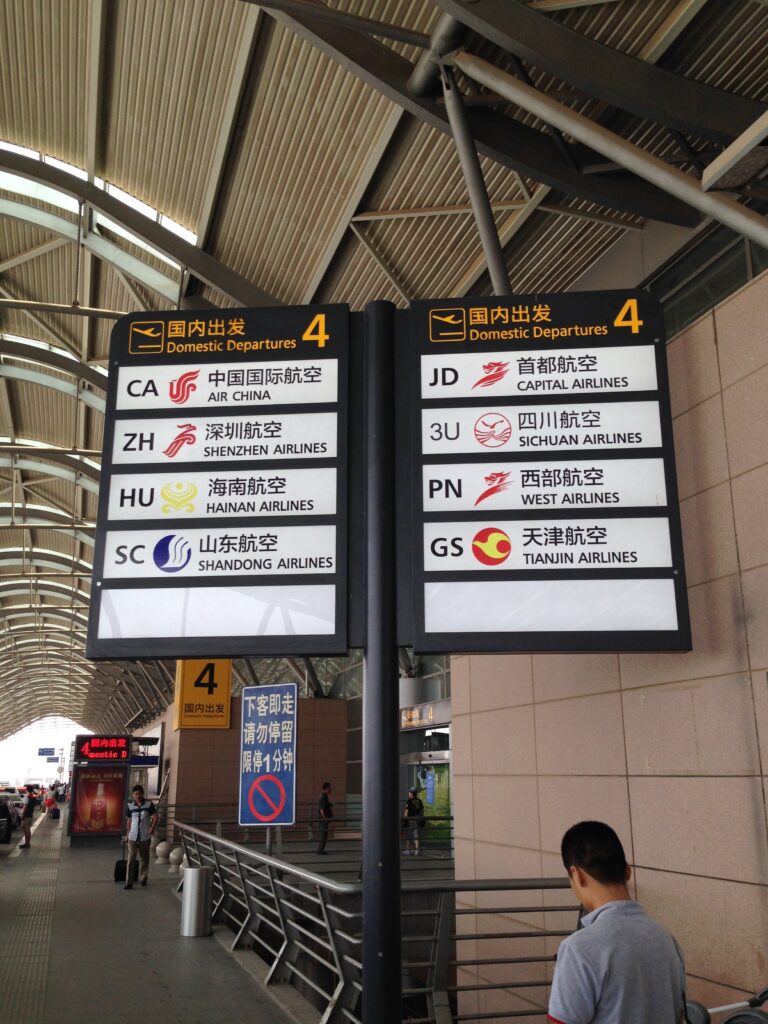 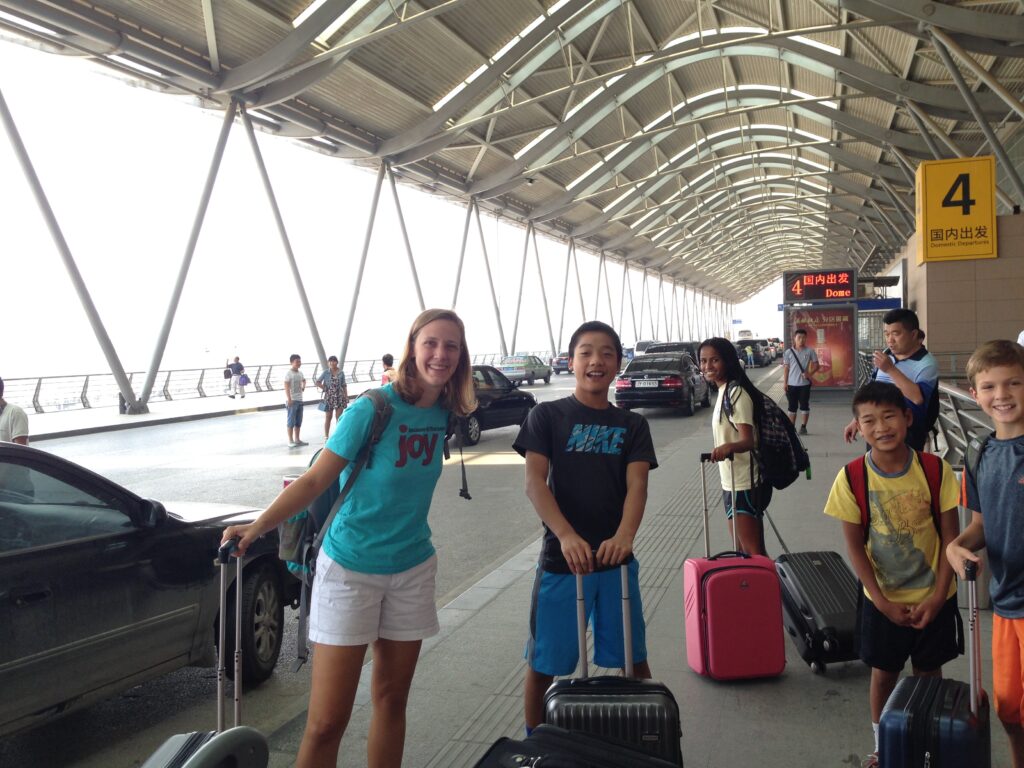 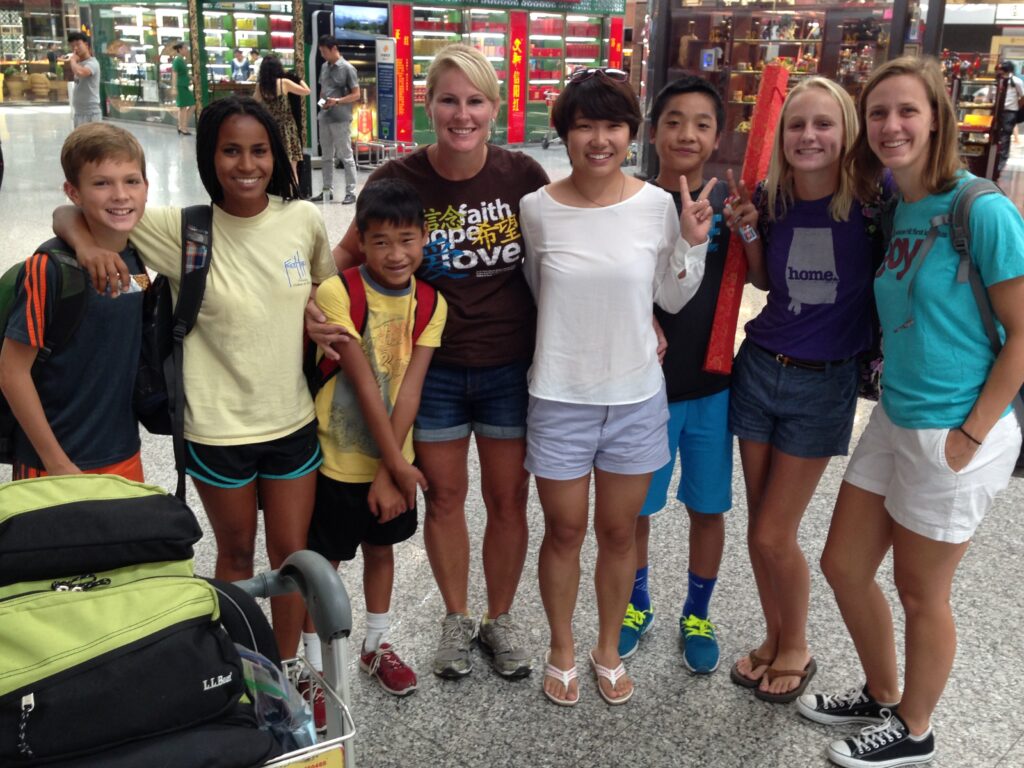 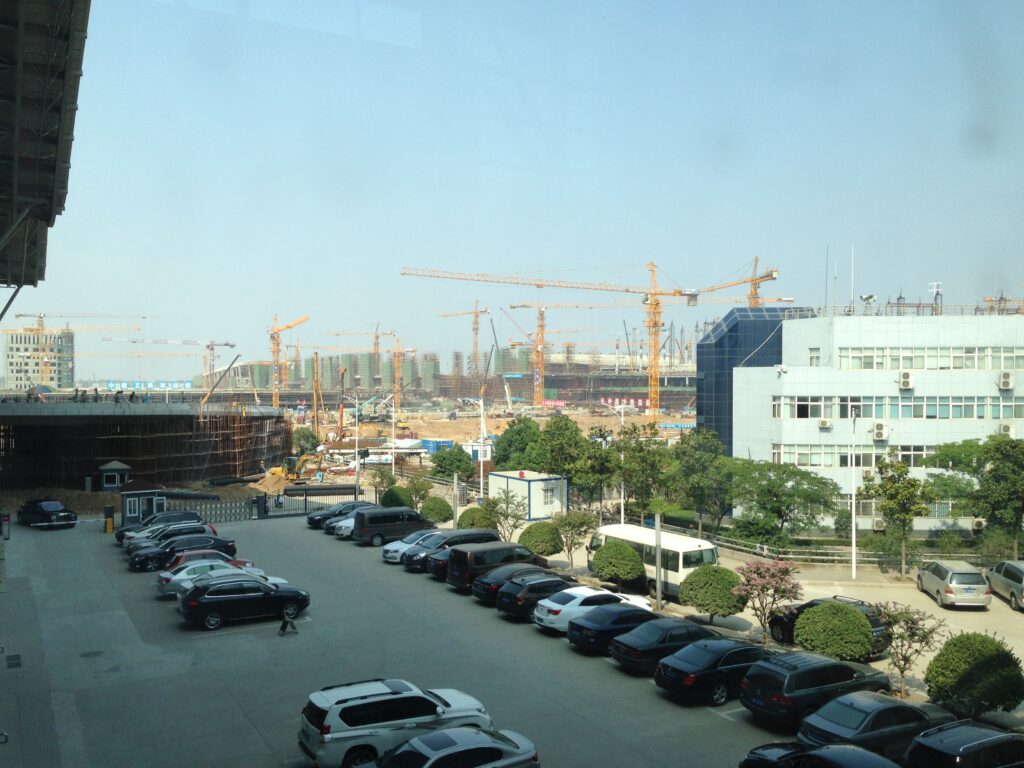 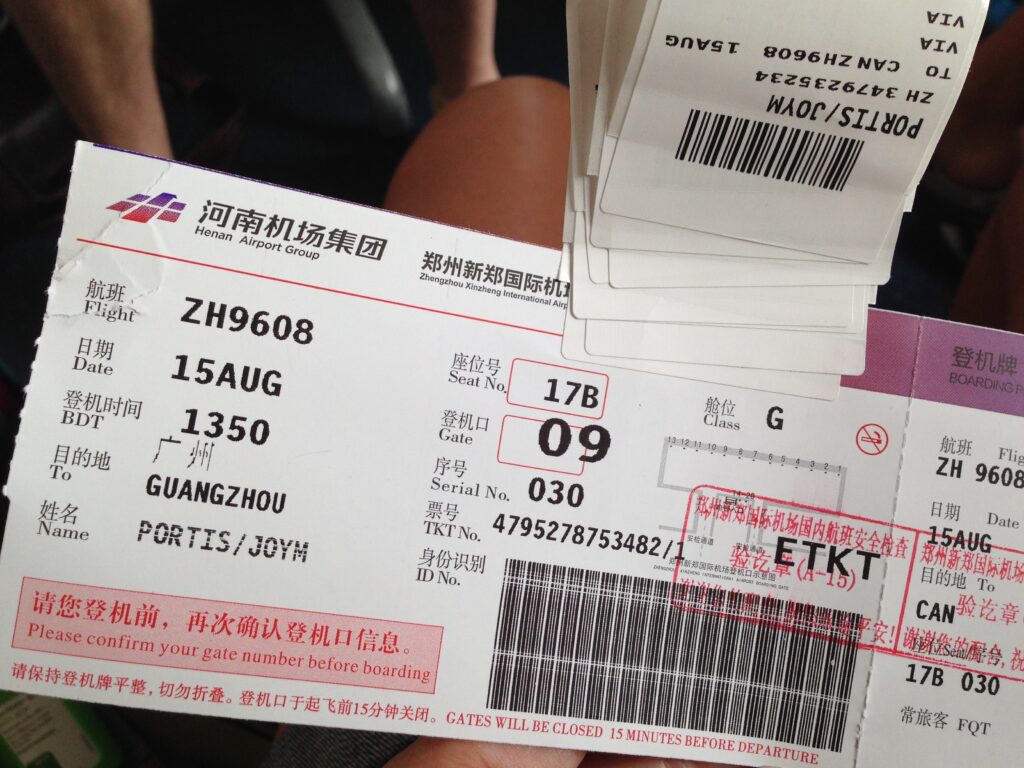 We had about an hour to spare but we noticed the sign eventually said delayed. We were able to figure out there was a gate change and moved accordingly. It was a little iffy for quite a while and we were not sure if we would be on out way to Guangzhou or not. After about 3 additional hours we finally boarded and we were each compensated 100 yuan for our delay. The kids are excited to have some additional shopping money! 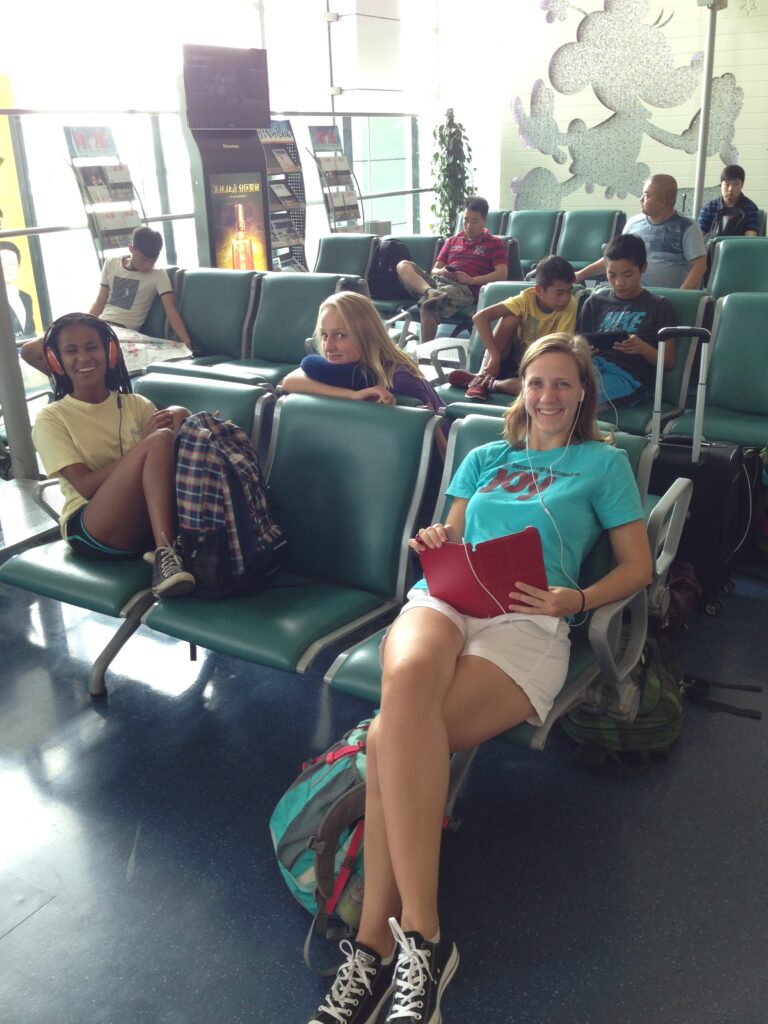 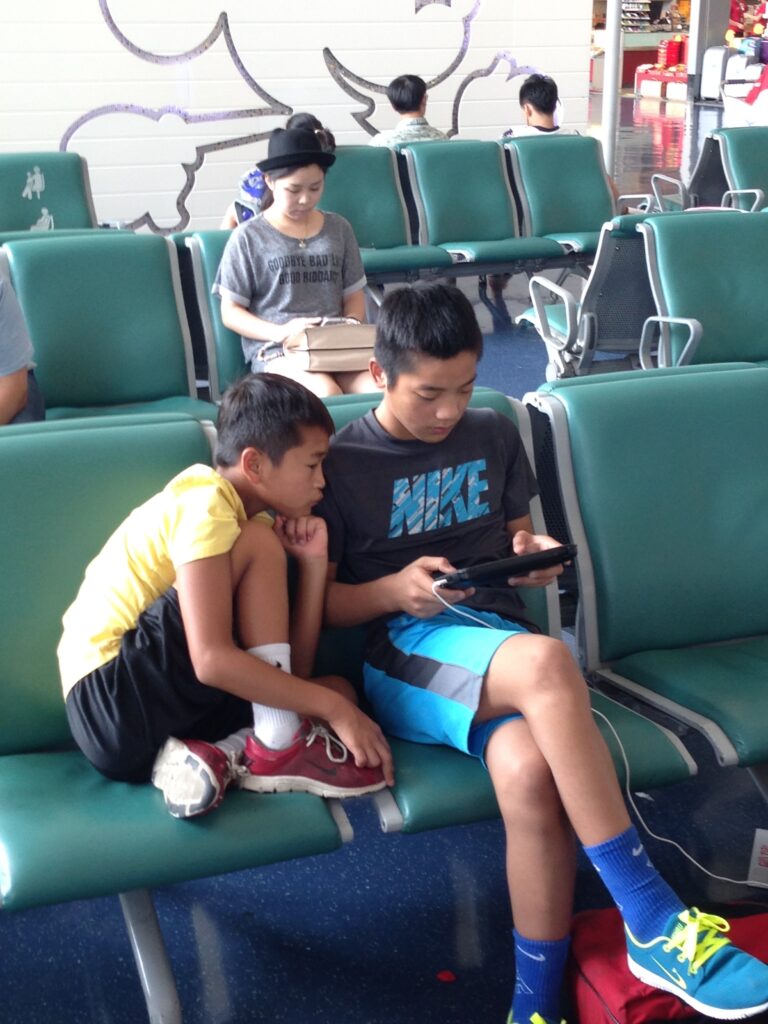 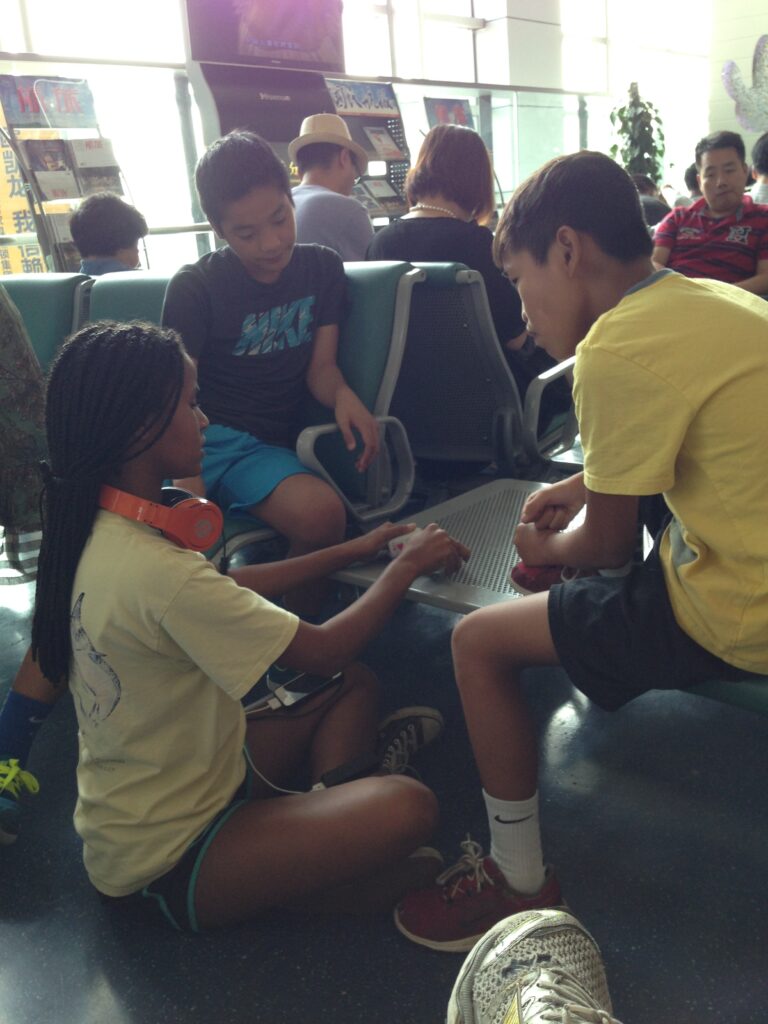 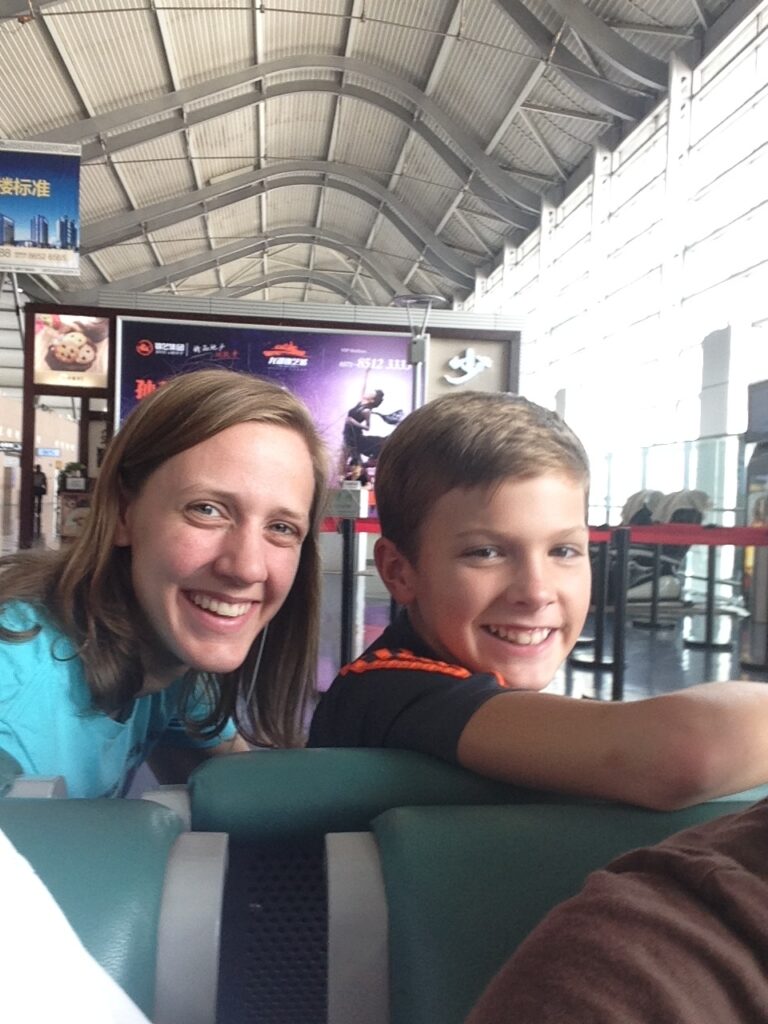 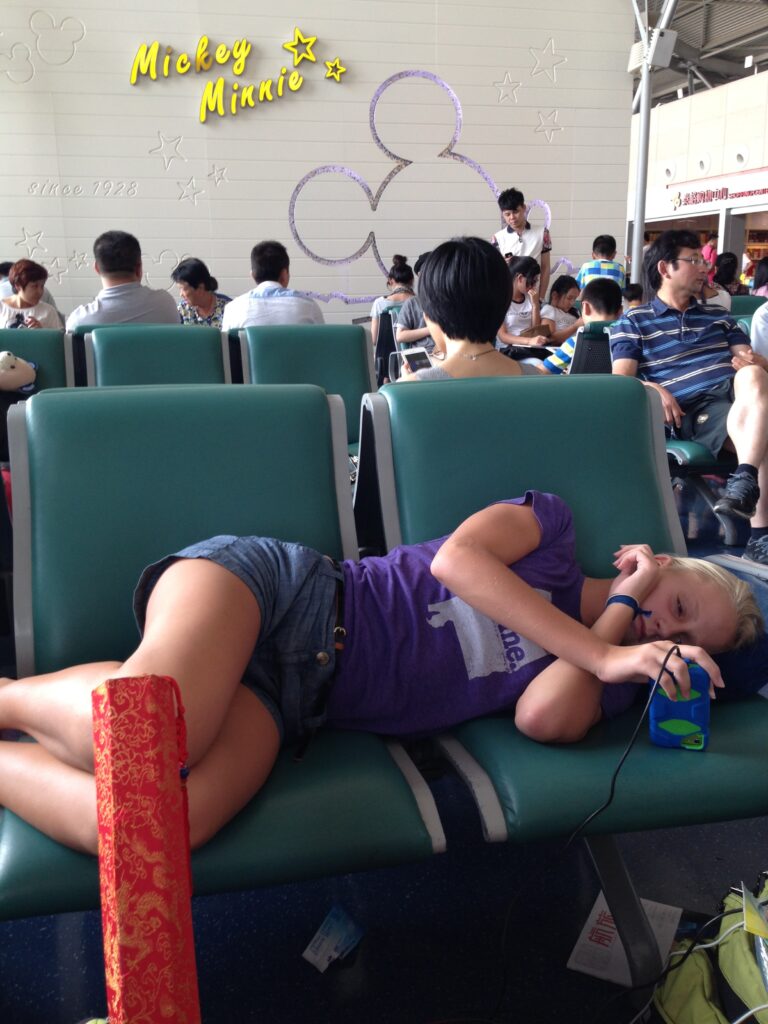 The flight was rough at times and I seriously thought I might have a panic attack. Zoe on the other hand LOVES turbulence and thought it was “fun”! I was so thankful when we finally hit the runway and pulled into our gate. 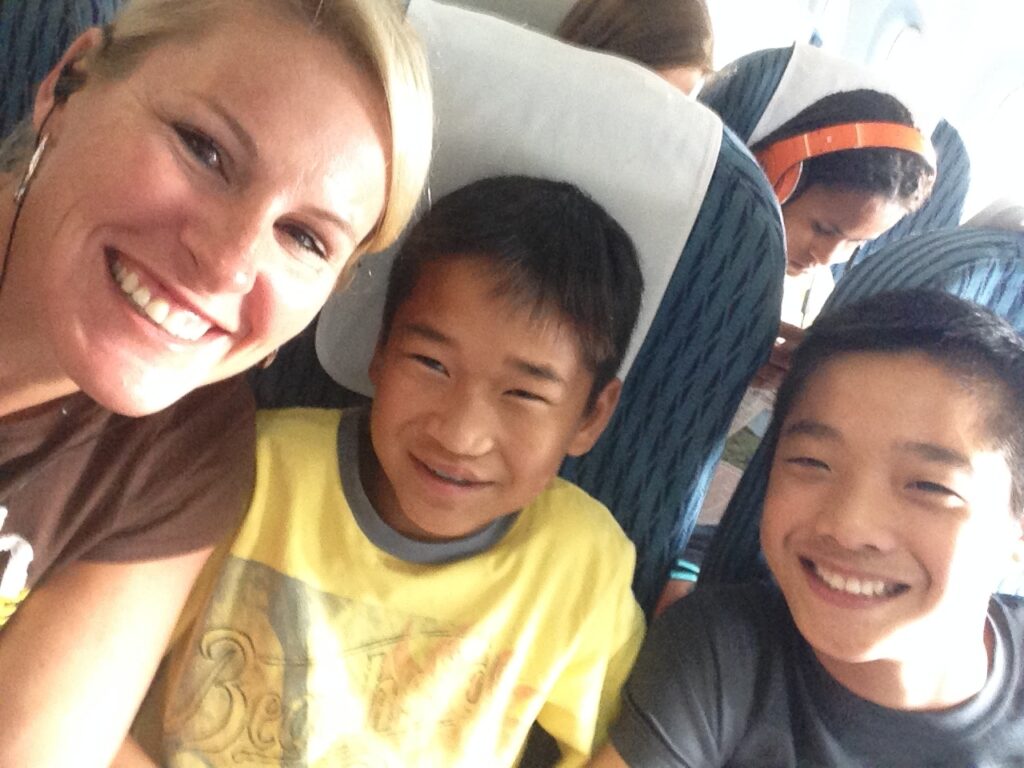 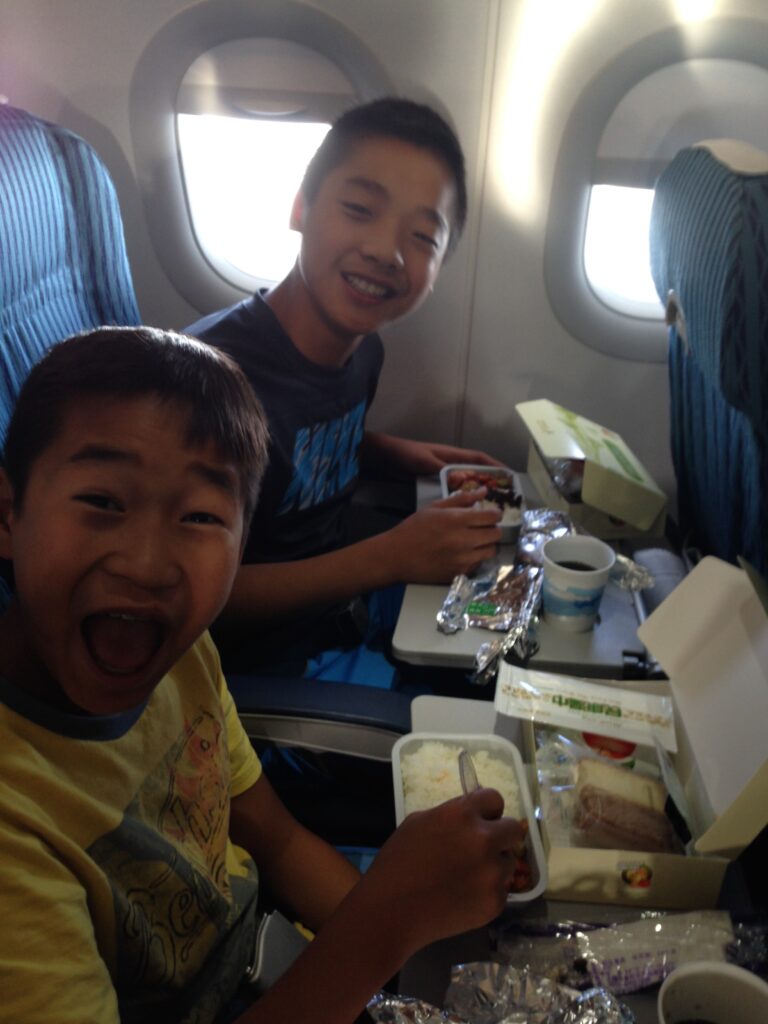 They each ate 3 boxes of our chicken and rice! 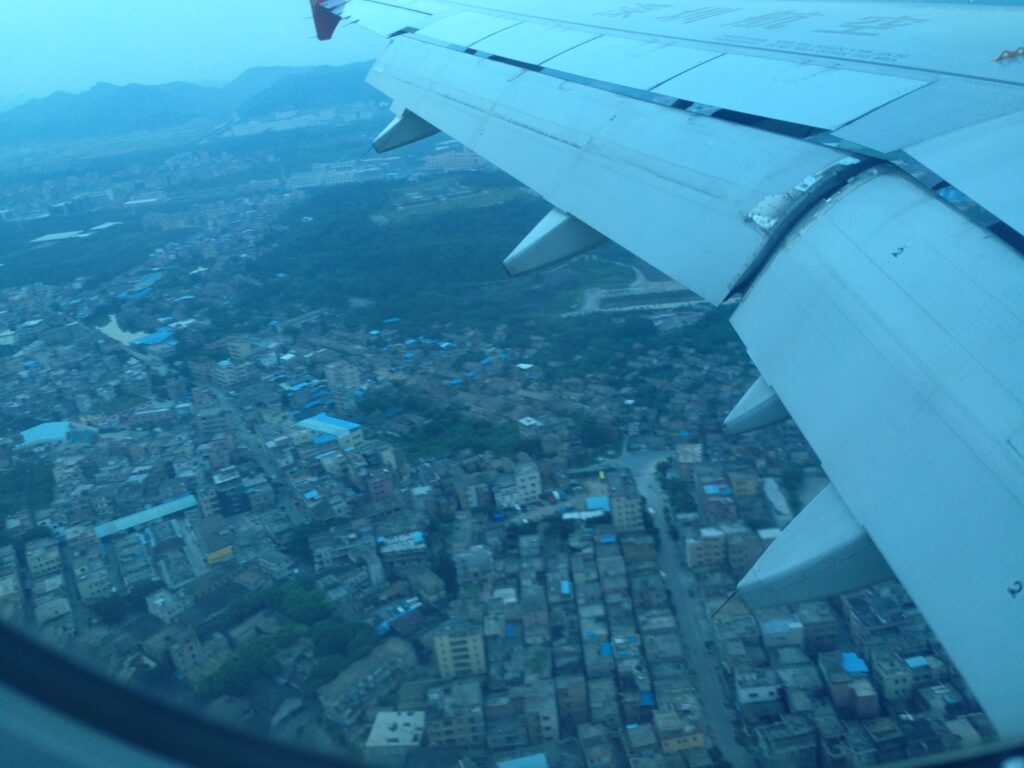 Our luggage all arrived and John was waiting for us and escorted us to our ride. We have been traveling in a minivan but this time we had a full charter bus just for out family! It was nice to spread out. Before we could leave the airport we saw 2 wrecks. Motorbikes/ mopeds, etc were banned here several years ago according to John. Traffic is still insane, just petty much all vehicles and apparently not as good of drivers in this area! 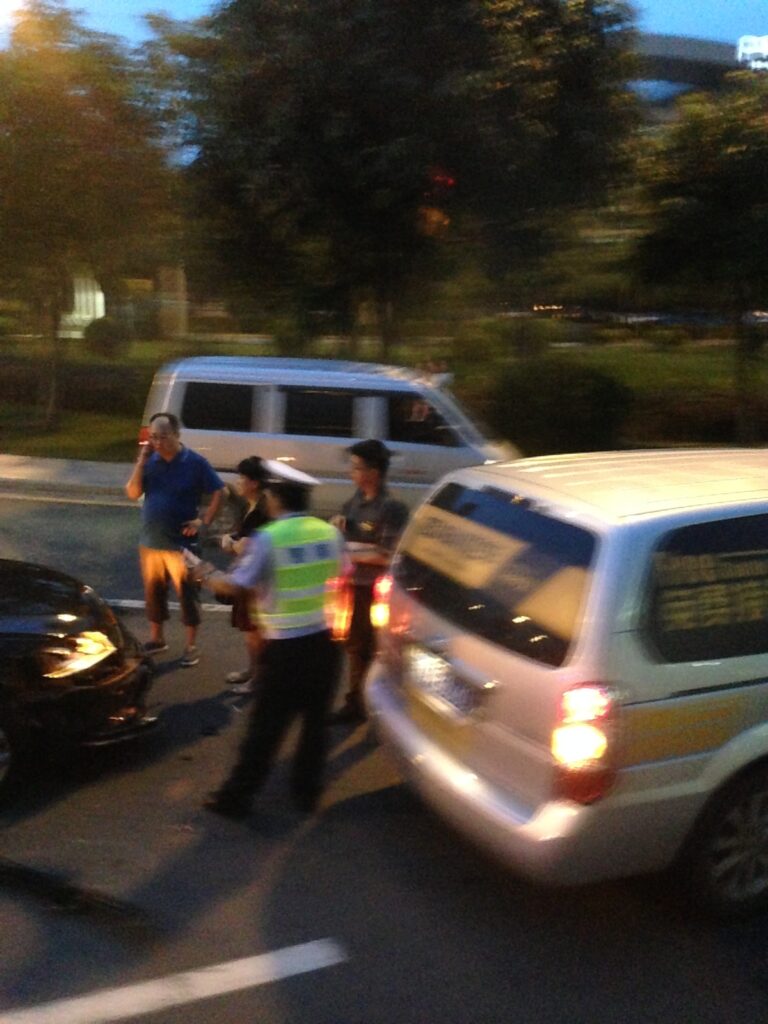 We made it to our hotel, the Westin, and as usual Cole did not like the room arrangement. We’ve learned never to go unpack in the first room. We always send Cole up and get his approval first before we even attempt to go up. He eventually was pleased, we took out luggage upstairs and then headed out to try and find something to eat. John thought there was a pizza place in the mall across the street but as we got closer he realized it was now a 7/11. Cole was not feeling McDonalds, I really was just ready to go to bed, all options were going to close at 10 ( less then an hour) so as we walked and saw few safe options we went with McD’s. I’m not sure if you’ve seen the recent scandal in the news concerning bad meat and veggies in China, but I have and therefore I stuck with fries. John helped us all order and then reorder what was missed the first time and when we had all finished we walked back to the hotel, unpacked and called it a night. Looking forward to seeing Guangzhou tomorrow! 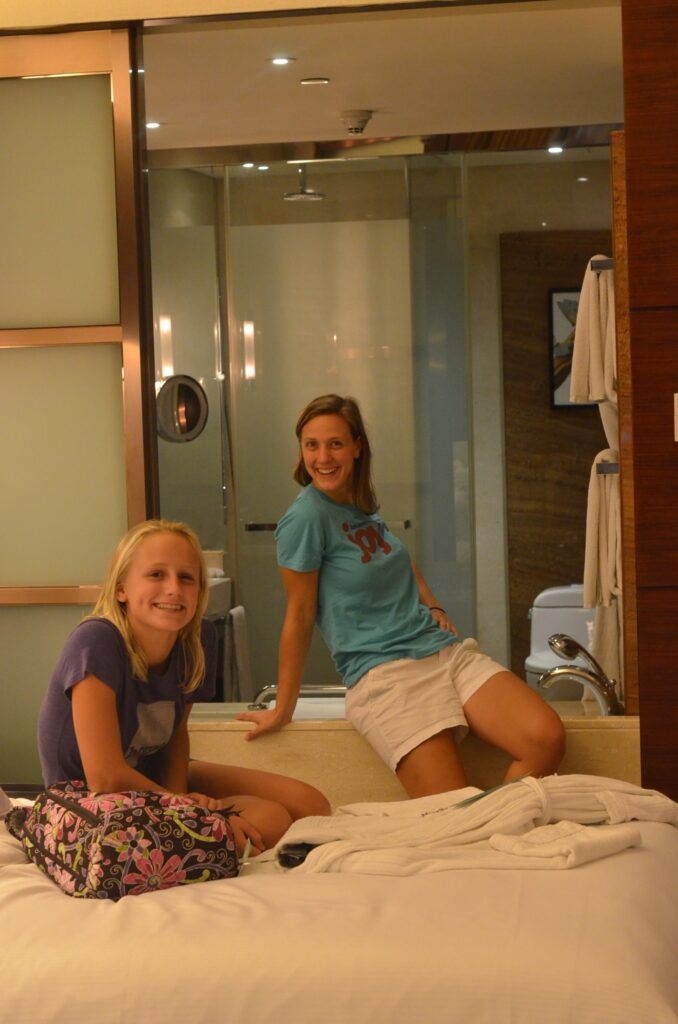 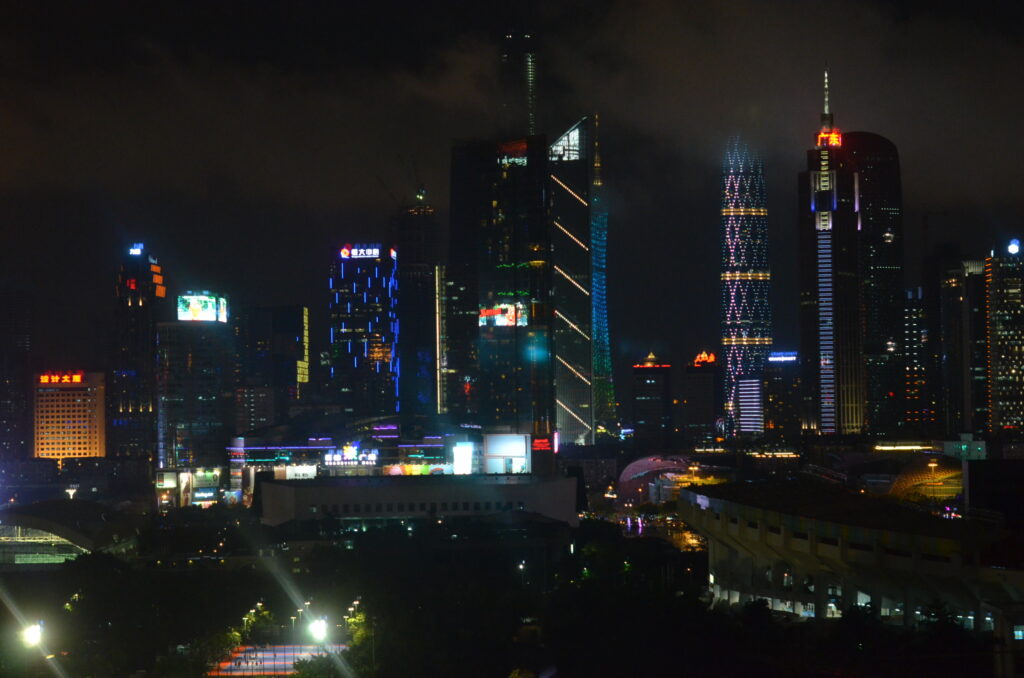 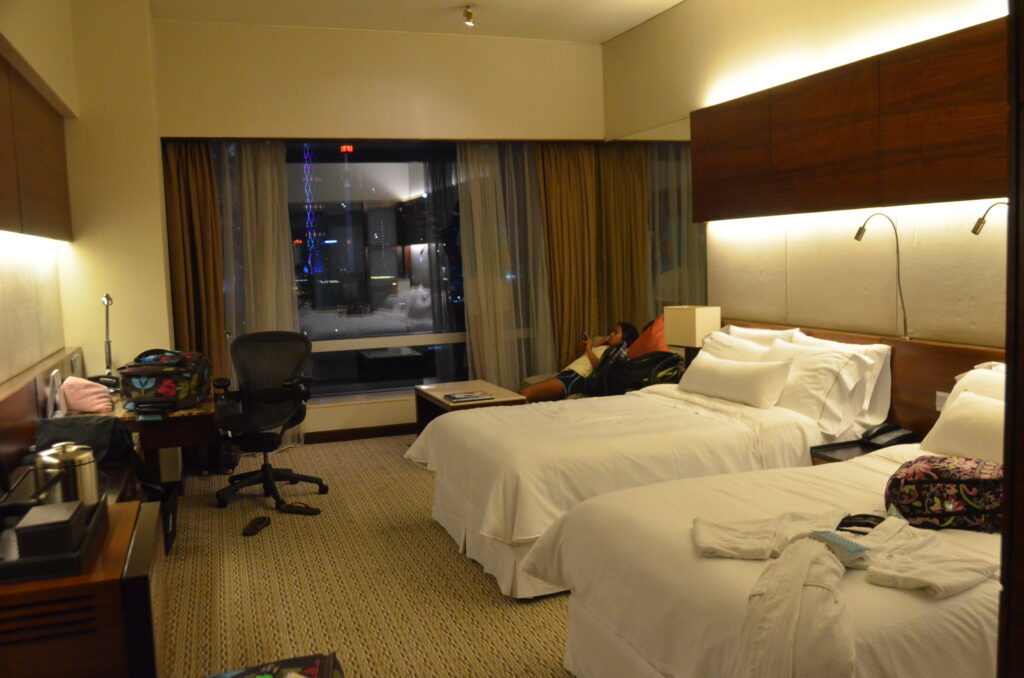 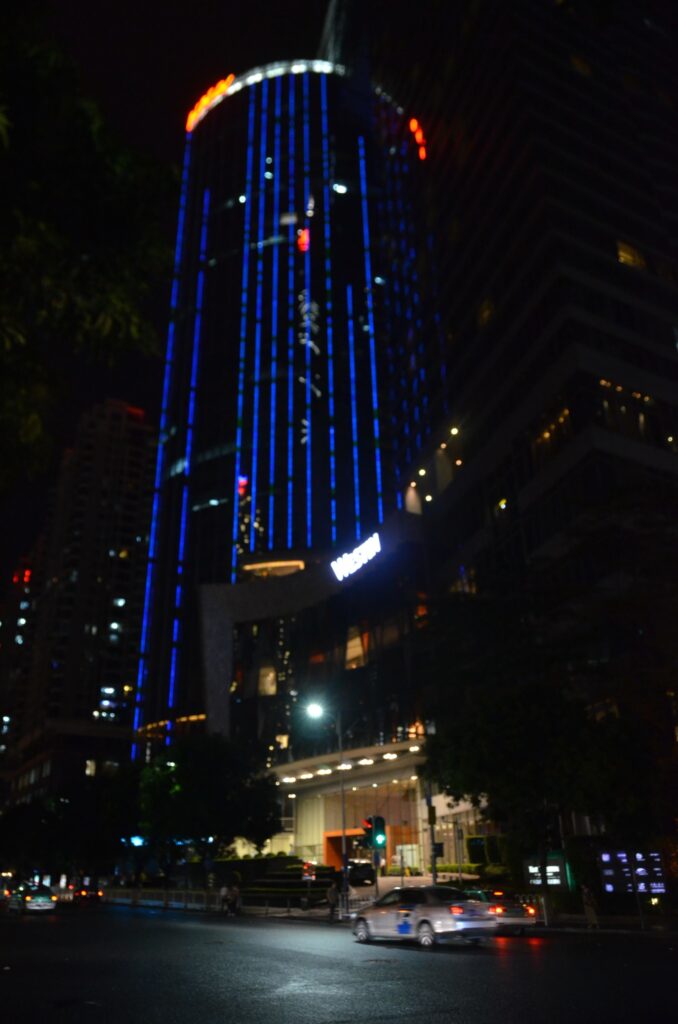 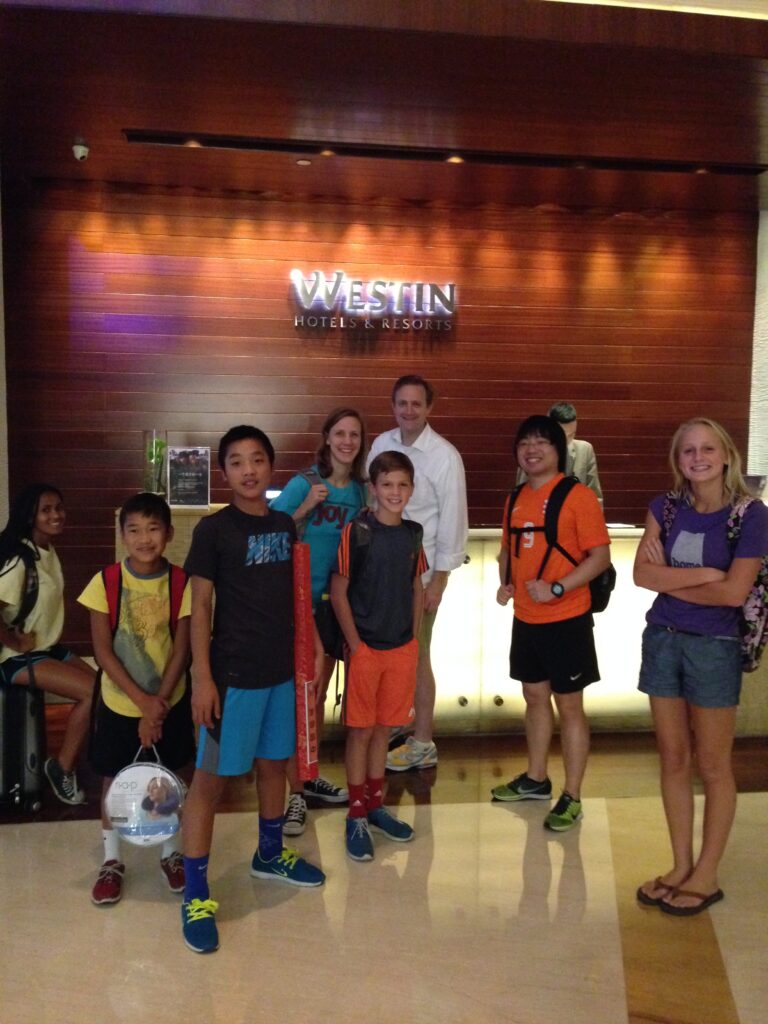 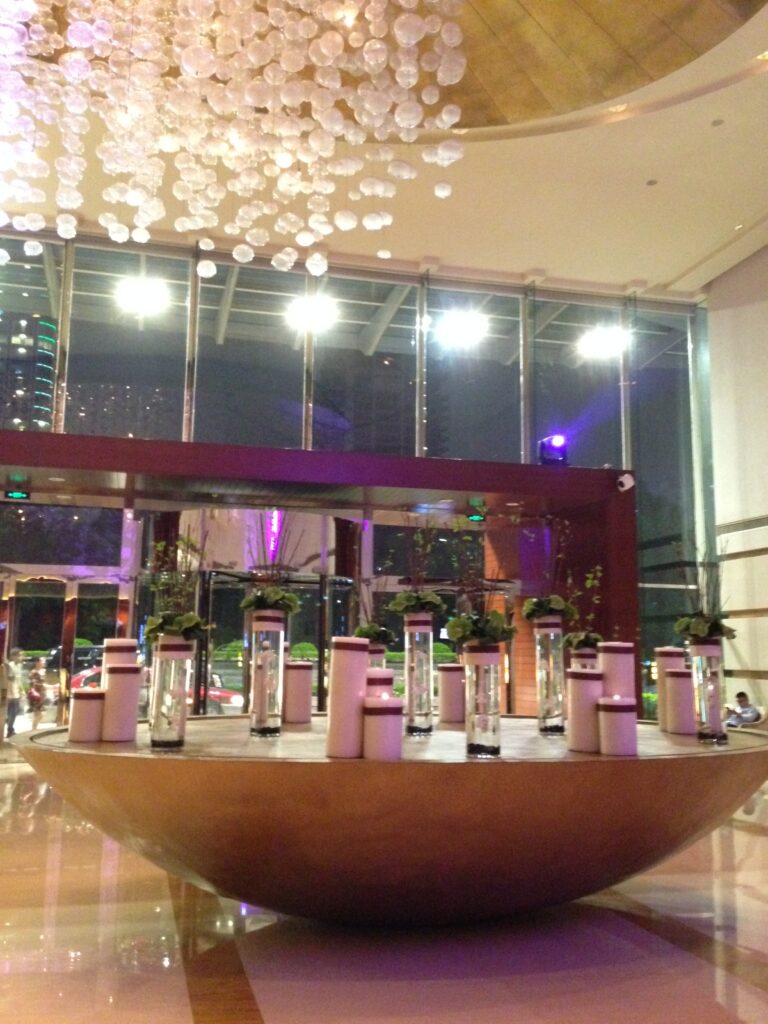 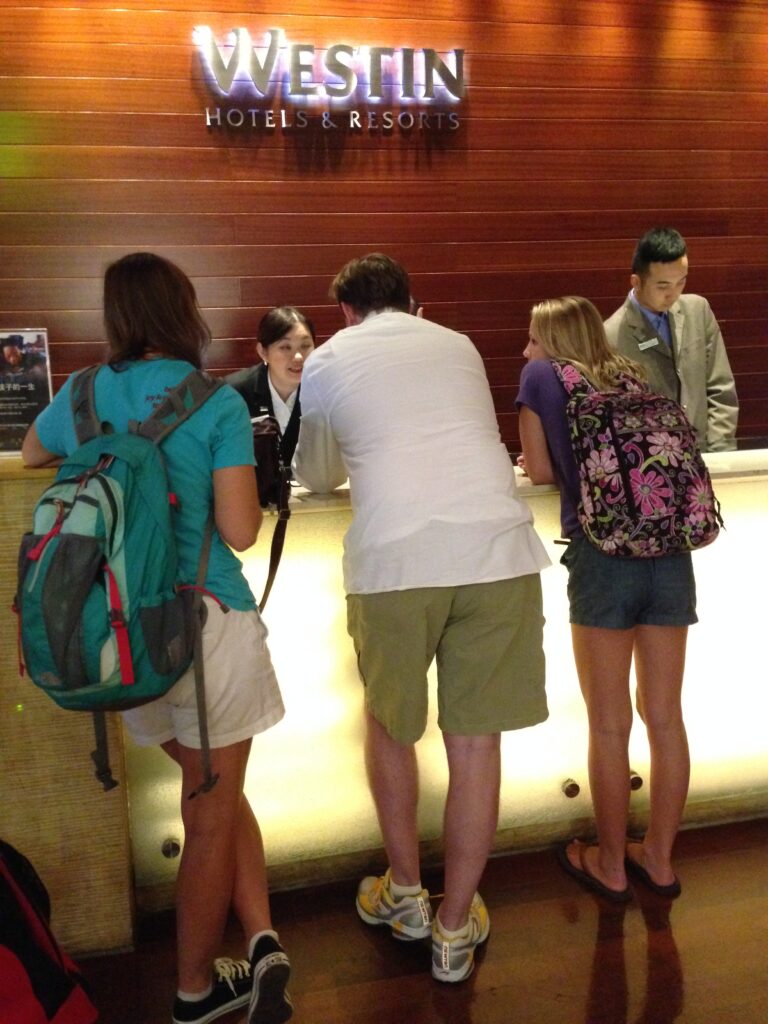 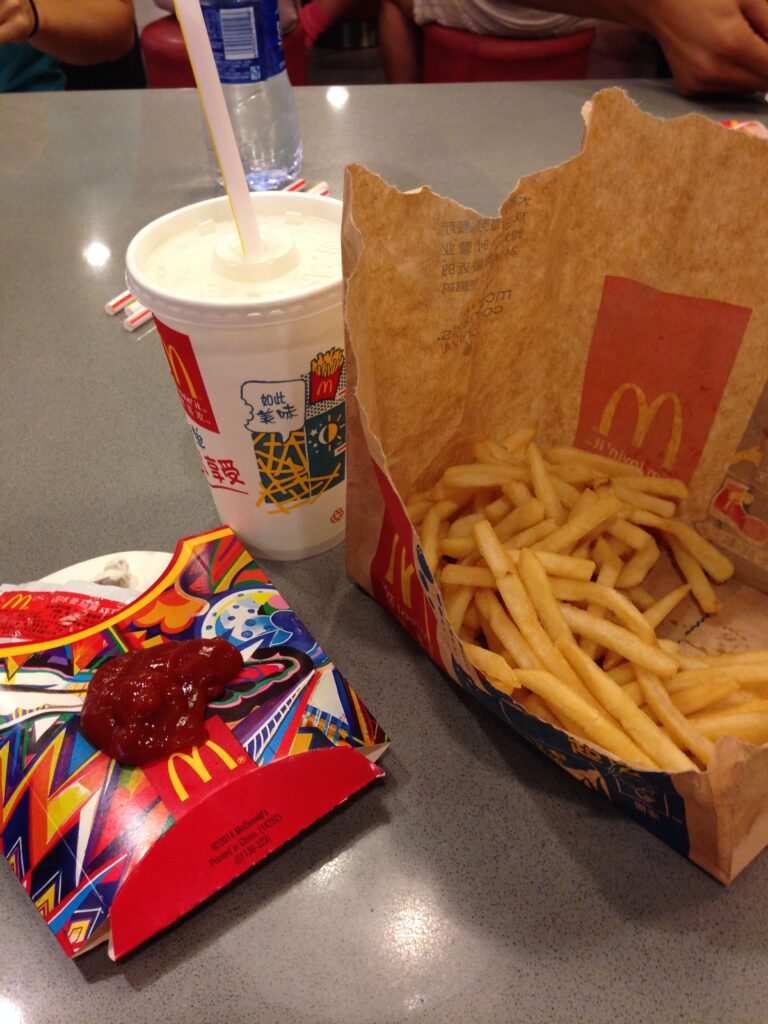 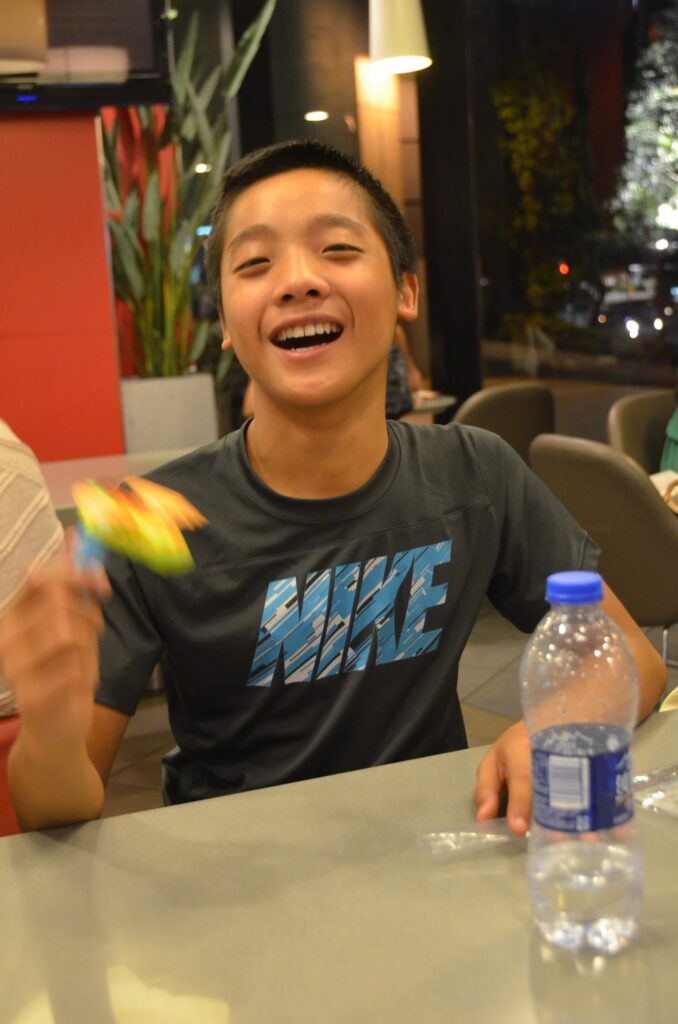 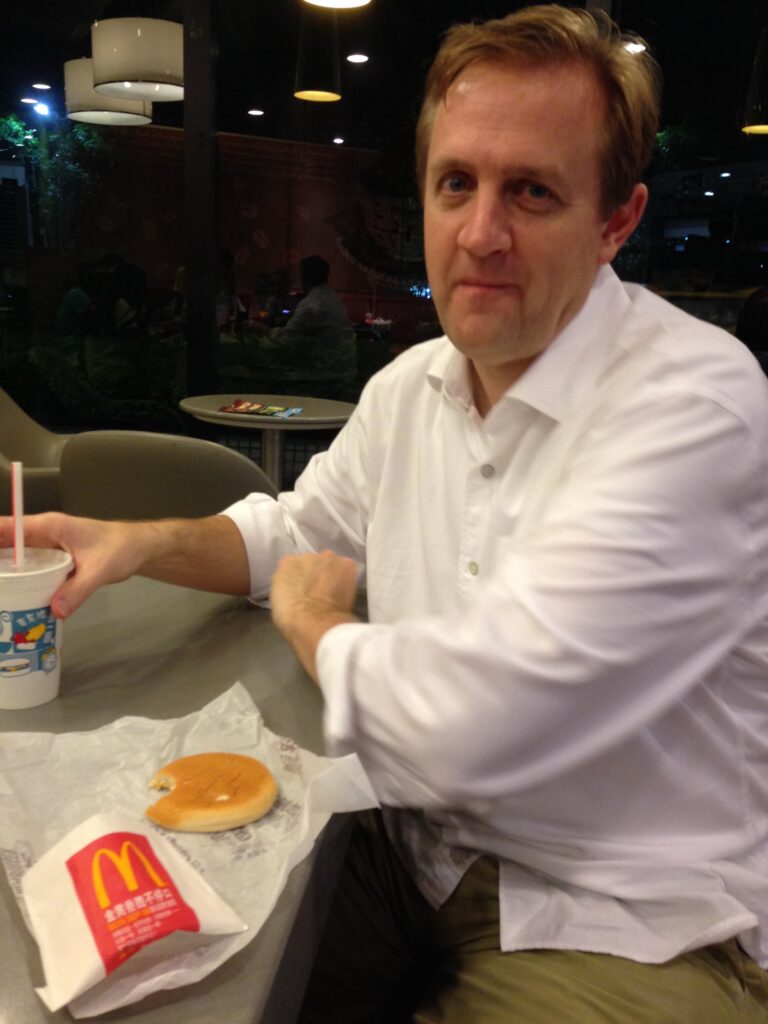