It was nice to have a slow morning with nothing on the agenda. Our guide has to return today to LuoNing to get our final paperwork to be able to leave Jim’s birth province but we do not have to be present. She will bring our paperwork to us at the hotel.

We slowly woke up and got showered. Some watched TV, some played on their computers, others did schoolwork and Cole was able to work some from the room. We went up to the lounge for coffee and tea and enjoyed a few rounds of UNO along with lots of laughs. It was a sweet time of just playing together, talking and laughing. 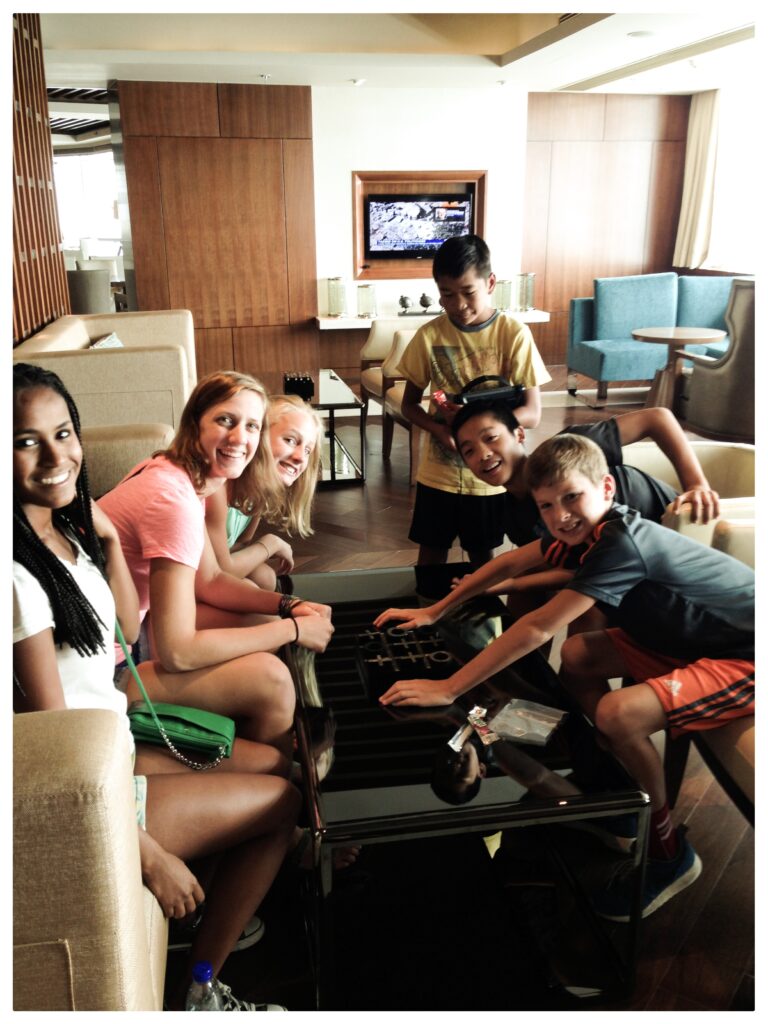 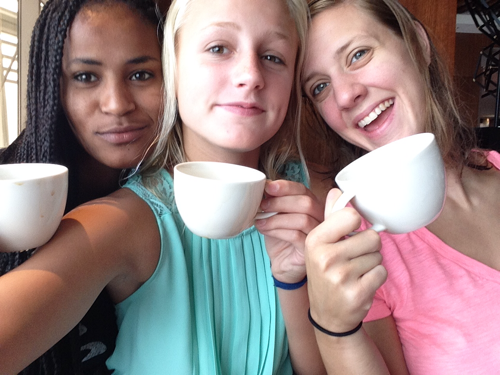 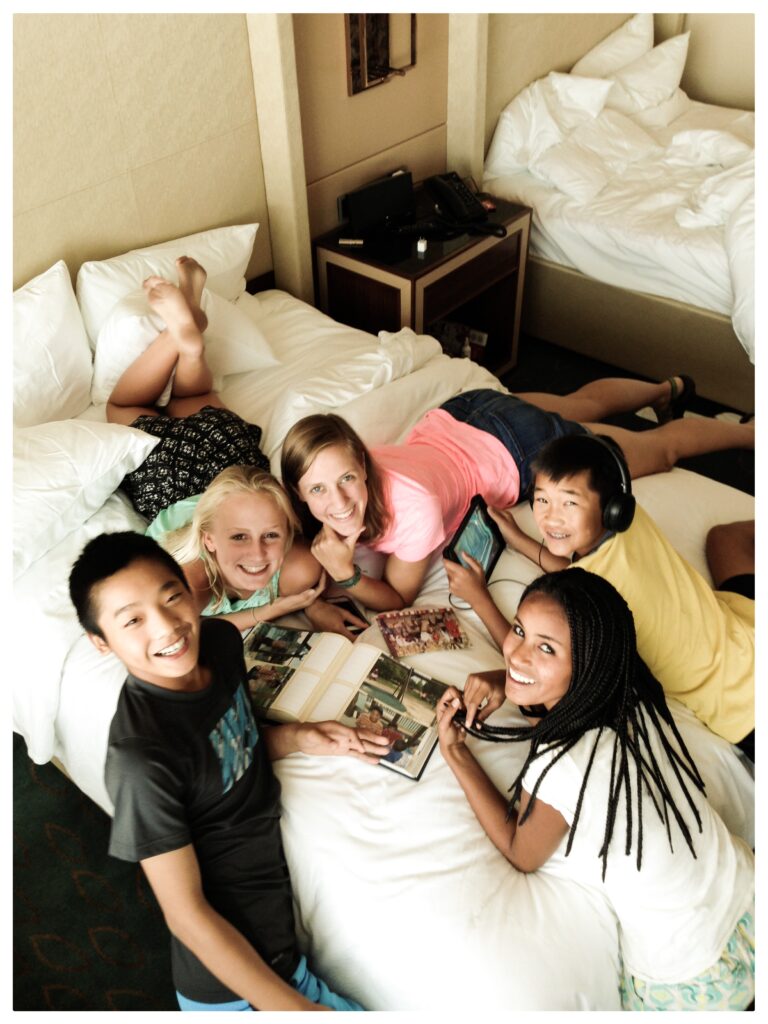 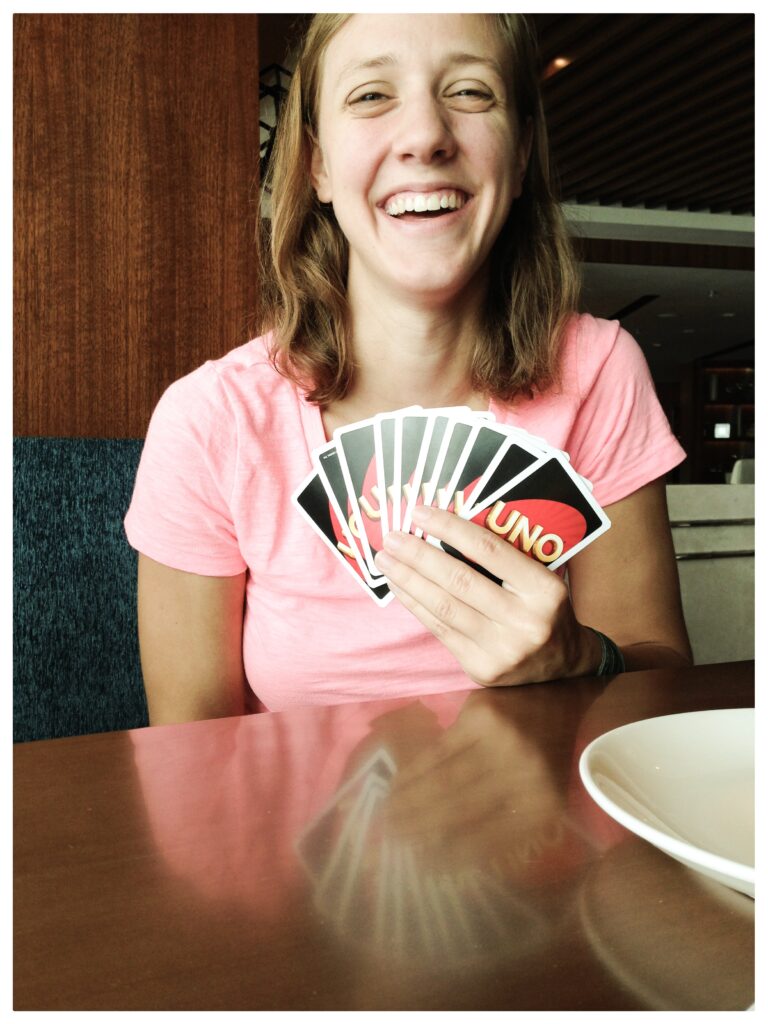 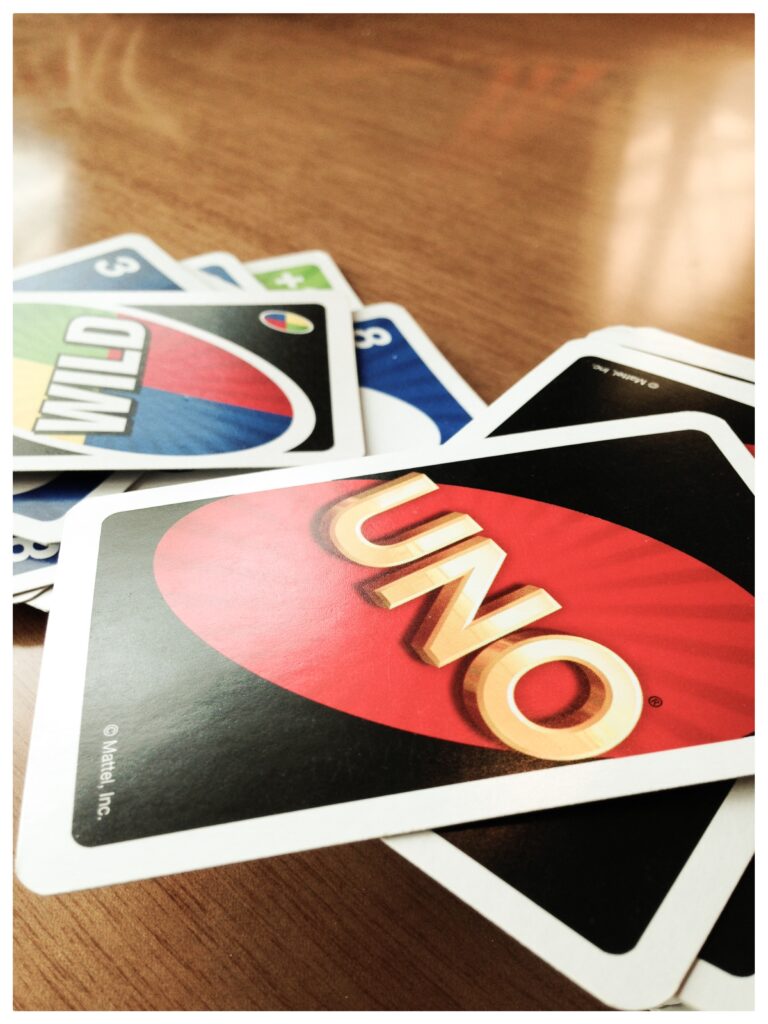 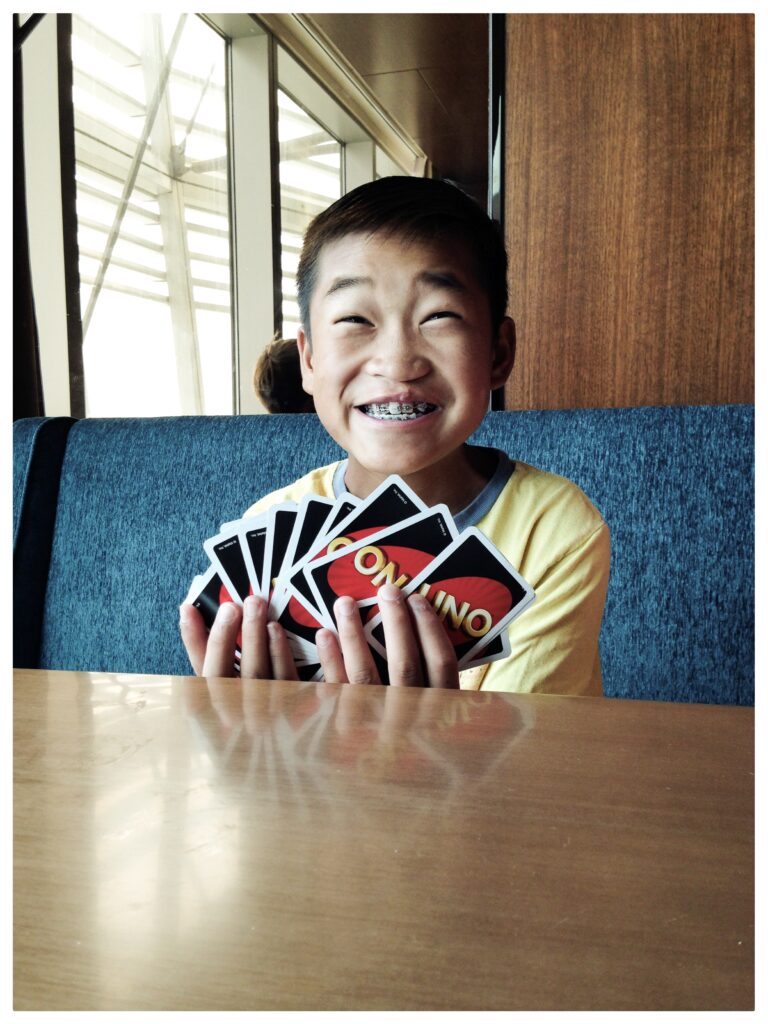 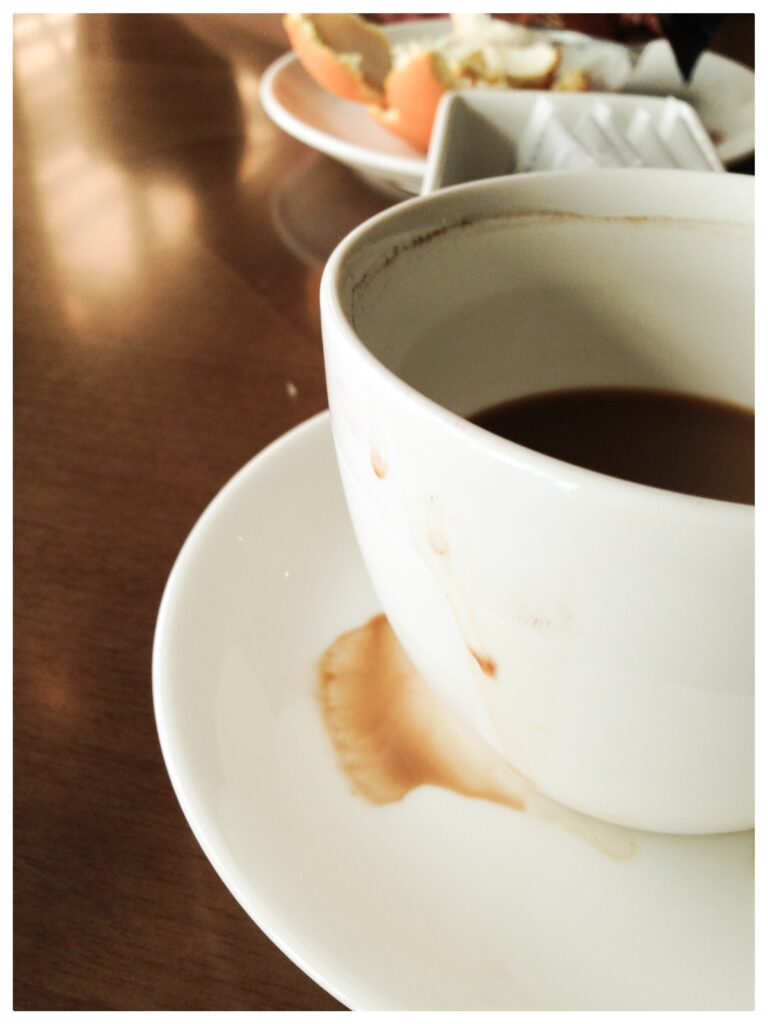 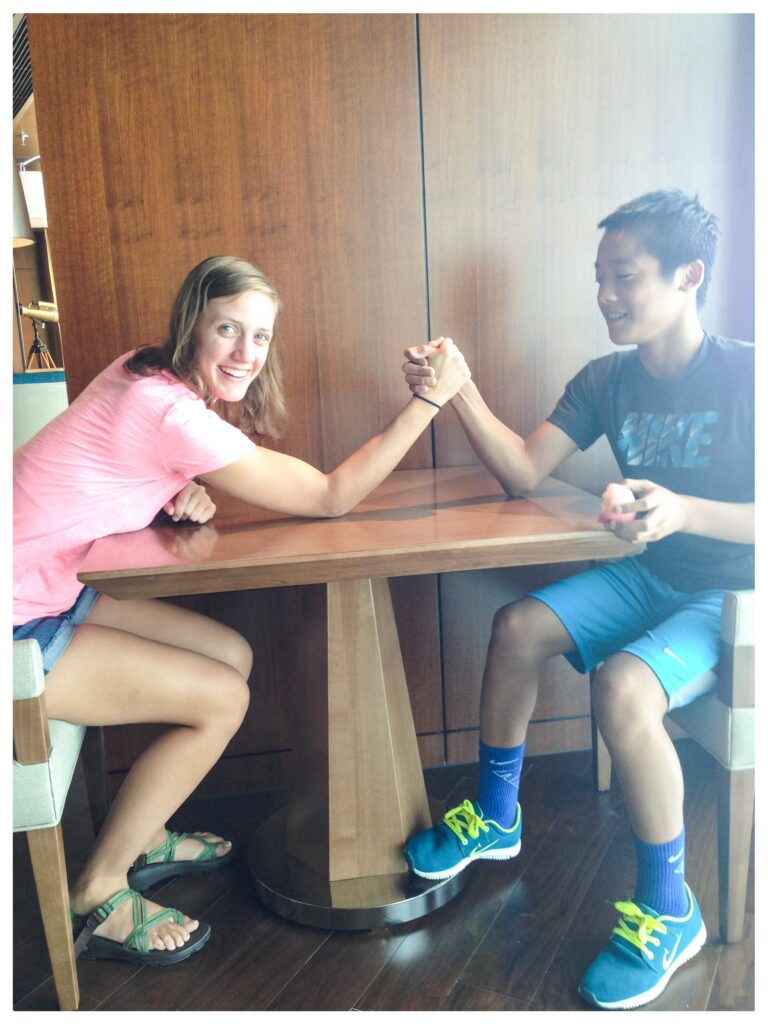 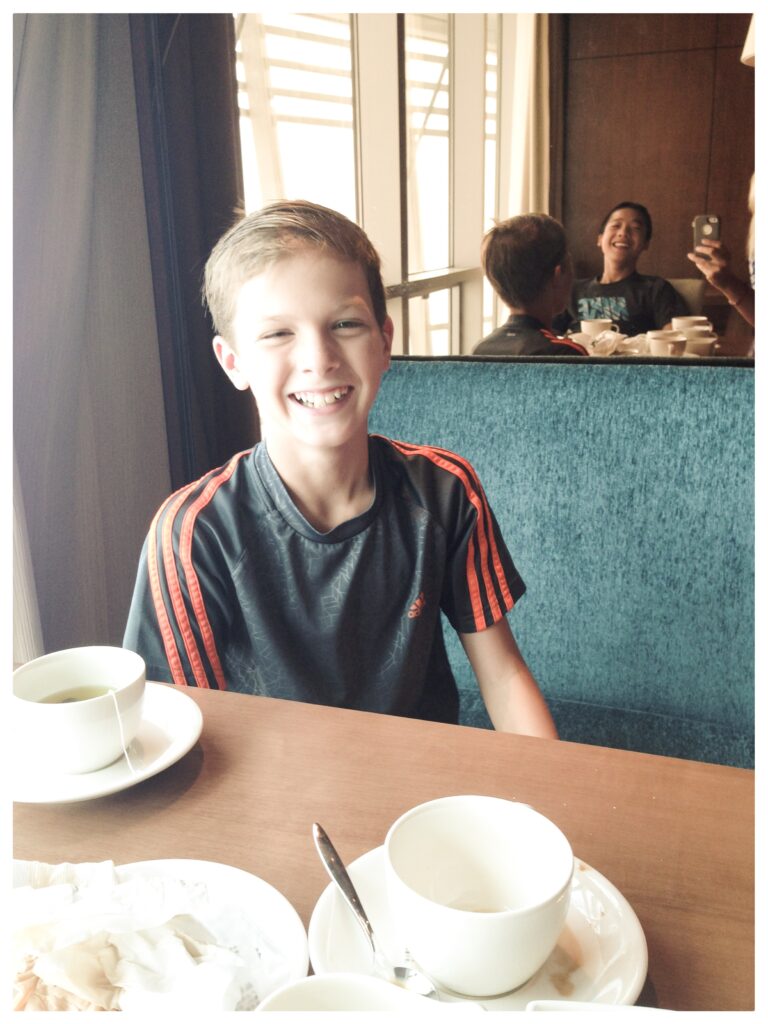 When our guide dropped us off yesterday she mentioned an 8 story mall that had the girls salivating. We had asked if there was anything fun to do nearby, like bowling, skating, basket ball gym, etc but Rosary said there was not. She said the Chinese do not know how to play or relax, they are all about working and making more and more money. It was interesting to learn the schedule for students: Elementary students go from 7:30-10:15, have a break for nap and lunch and then return at 2 and end between 4 and 5. Middle schoolers have to be at school by 6:30 where they run for an hour and then have reading time until class begins at 8. They break from 12-2 and class does not let out until 7:30! High School is the same schedule but they do not let out until 10 pm…. then they all still have homework!!!!! There really is no time for fun! As we are beginning another crazy school year, this puts our school schedule into perspective!

About 2 pm we decided we needed to venture out and the lady working in the lounge at the hotel thought we’d enjoy the mall too so she hailed us 2 cabs and before we could really get a plan together she announced they were waiting for us downstairs. I hopped in the first one with the boys and Cole was getting into the second with the girls. As soon as we shut the door our driver took off, I assumed he knew where we were headed. As we entered the busy roads I asked the boys if they could see the other taxi….no where in sight. 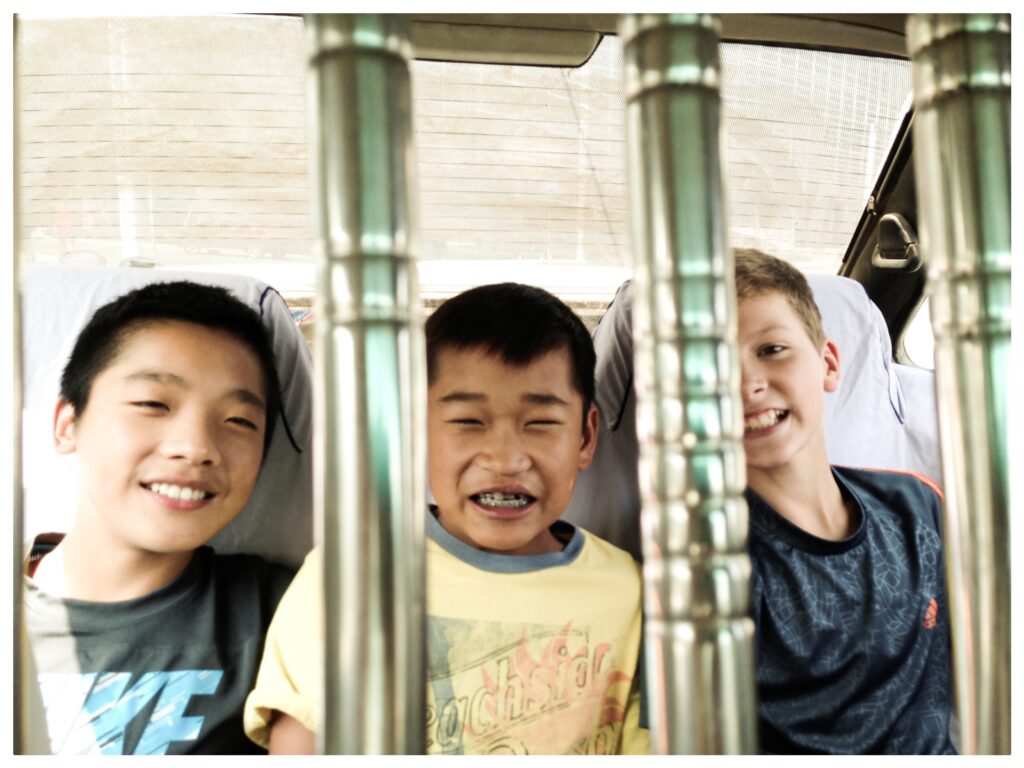 I then realize I have the money pouch with all of the money we have had exchanged! We began to get a little nervous especially since we can only communicate on our phones where there is free wifi. After about 15 minutes he says something which I do not understand but I assume he’s asking where we are going. Thankfully I had the address Rosary had written down the day before still in my bag. He shook his head and pointed to a tall building ahead. I only hoped Cole’s driver knew where they were headed too. We were let out on a corner across a busy street from the mall. We paid and our driver drove off. We stood on the busy corner trying to avid being run over by the motorbikes and trying to spot our crew in the taxi’s passing by while also trying to look across the busy intersection to the adjacent corners/ roads to see if spotted a group of 3 caucasians and one African causing a scene trying to bay their driver 🙂 We had one Chinese woman very excited to talk with us and she talked 90 to nothing. Thankfully I was letting Jim handle her while I kept looking. She kept telling me what a kind heart I have. I thing she and Jim must have had the same conversation over and over because she talked for about 15 minutes. At one point she tried to talk to Samuel & Jon Cole and Jon Cole started making sounds that I did not recognize back to her. I whipped my head around giving him the eye thinking he was just mocking her and pretending to speak Chinese… I scared him with my glare and he stepped back and said “what? I told her I don’t understand” ….. apparently he’s picking up on the language much faster than me 🙂

I decided we’d walk up to the next corner, cross over and check on that side of the street. We weaved in and out of cars, walkers, motorbikes, scooters and eventually made it to the sidewalk in front of the mall. No sign of them anywhere! There was a KFC, Haagen Daz and Starbucks on the corner so I was walking around all of them trying to connect to the wifi while the boys kept watch. I was not having any luck connecting and right as we were about to give up and just go inside trusting that they would figure something out , we heard the sweet sound of familiar voices coming out of the mall! Reunited and it felt so good!!!! 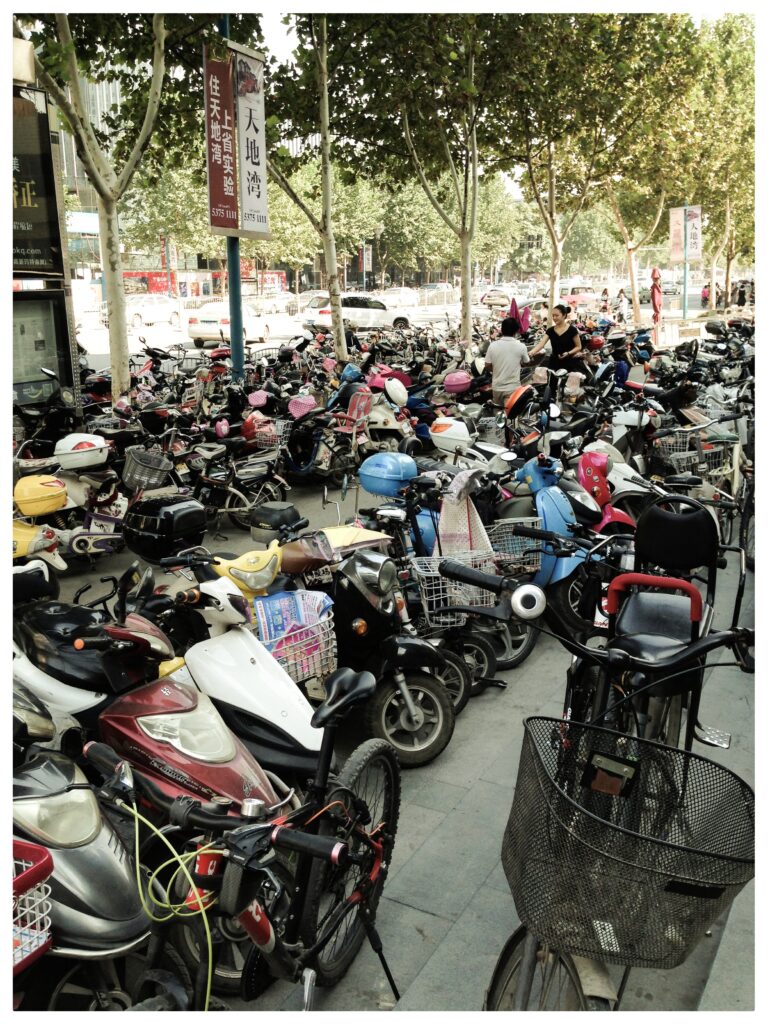 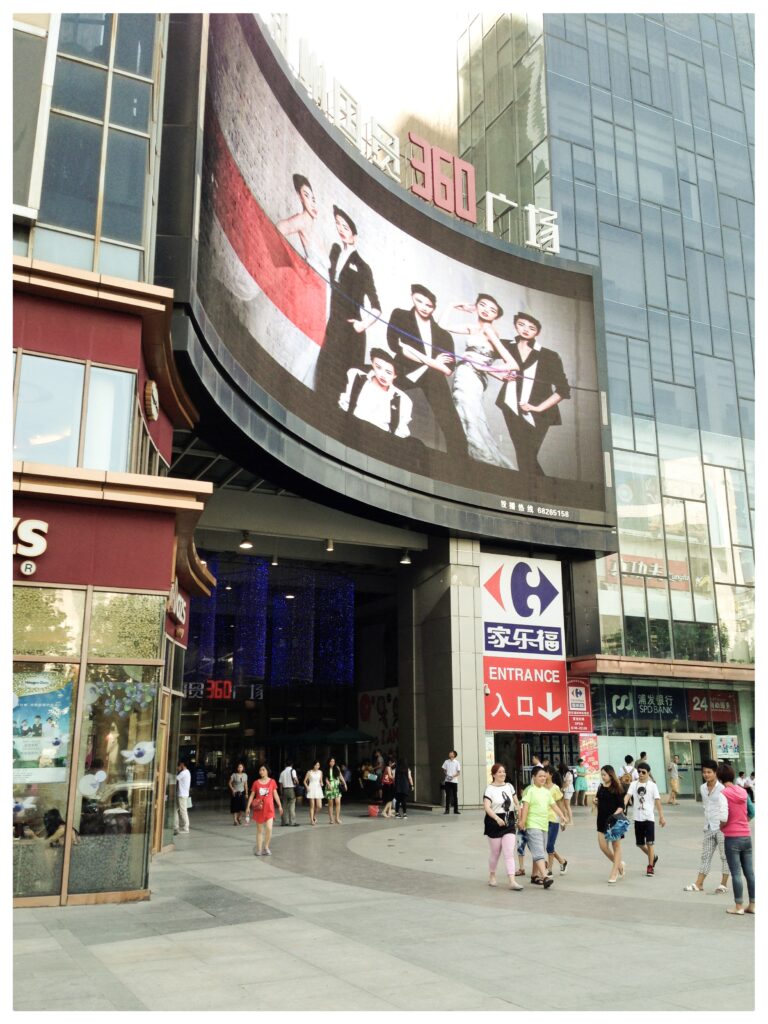 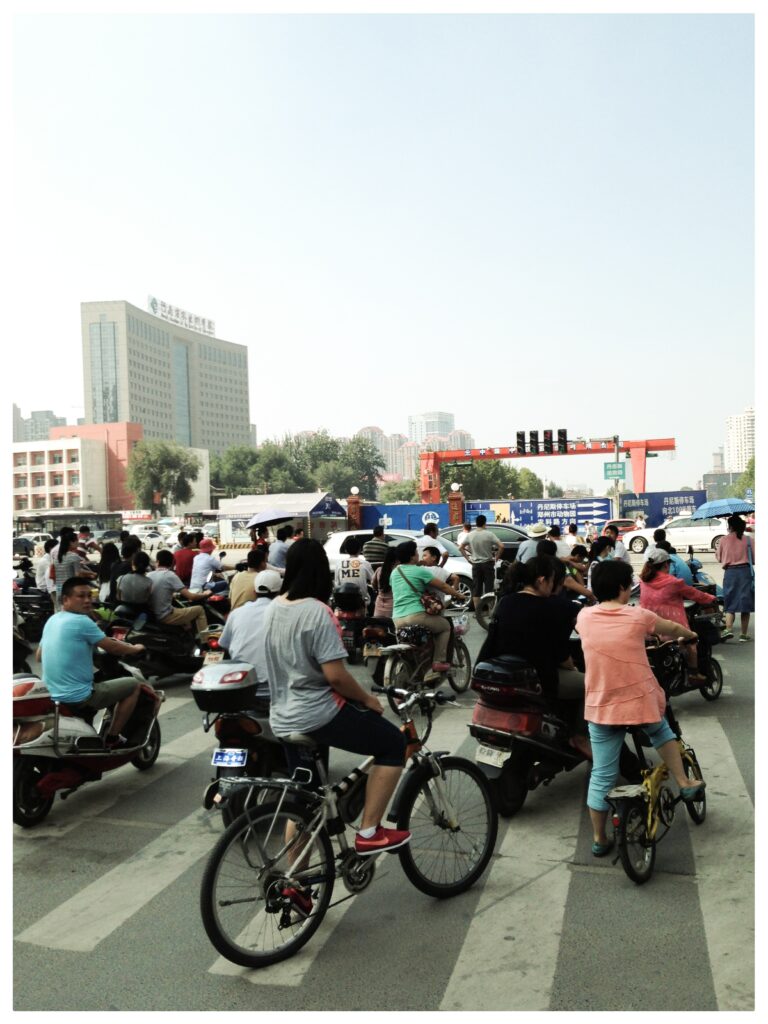 They had convinced the driver that they were giving him much more money that what their fare was. The ride cost 20 Yuan, which is equal to a little over $3 yet they gave hime a $20 because that was the smallest they had. So thankful it wasn’t me! We ended up separating for an hour so the girls could shop and they boys were going for food. We met back up and we were all ready for a snack. Cole and JC and eaten Subway and Jim and Samuel had wanted noodles but apparently it turned into a long process of making a choice of noodles, needing to get in a separate line to pay, etc and they thought they would be late meeting us so they just left. Cole and most of the kids were getting ice cream at Dairy Queen and SK and I browsed a yummy smelling french pastry shop next door. We selected some goodies to have for breakfast the next day.

We explored a little longer together as a family and we were quite a sight to see as evidenced by the stares we got everywhere, photos taken non discretely again and more stares and pointing. Zoe has decided she no longer wants to be famous.

We exited the mall ready to grab a cab and the crowd had multiplied by 1000! It was jam packed! As we waked to the corner there was a crowd of people sitting on the wall in front of a fountain and as we passed by a grandmother held her grandson in the air as he peed into the crowd through his split crotch pants. There was no trying to be discrete… right into the crowd. The kids were a little shocked but had a good laugh. As we made it tho the corner and I realized how busy traffic had become and how every cab passing by was already full, I was beginning to worry if we would be able to make it back to the hotel. Not having a way to communicate is not fun! We decided to cross over to the other side of the street where our cab let us off. After a few minutes a cab pulled over letting a couple out and the boys and I hopped in hoping Cole and the girls would not be far behind! This time we made sure we both had money!

Our driver was uncertain about the location of our new hotel but after getting out of the traffic jam we eventually made it. We headed up to the lounge for a snack and about 15 minutes later Cole and the girls walked in! We were very lucky! You really have no idea how many people I’m talking about and how few cabs! Their taxi driver felt like he had rock stars in the car with him. While he was driving he kept taking selfies with the girls in the background and sending them to his friends 🙂 I was so thankful to be back in my hotel room! We got packed up and ready to meet Rosary in the lobby at 8:30 in the morning! 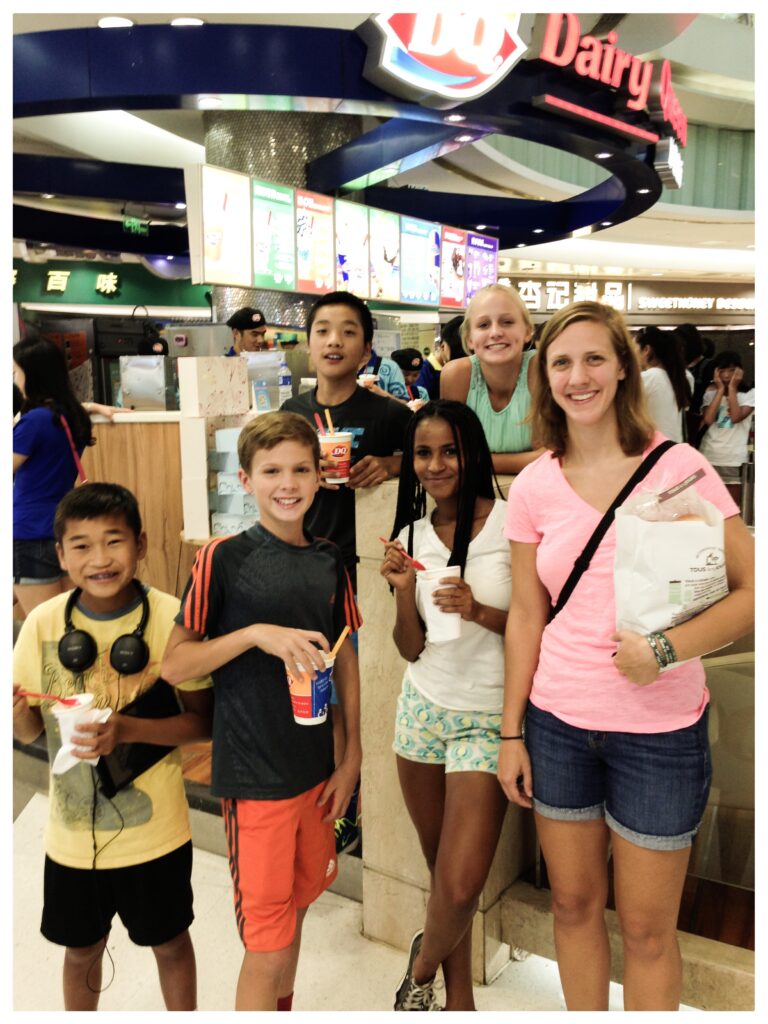 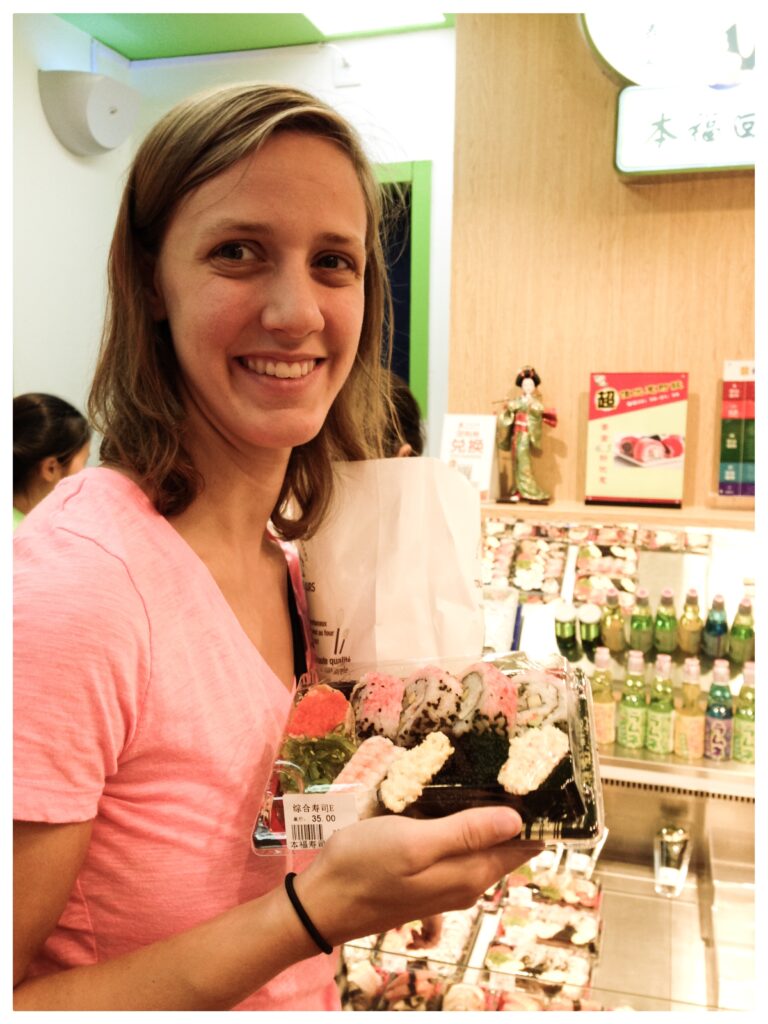 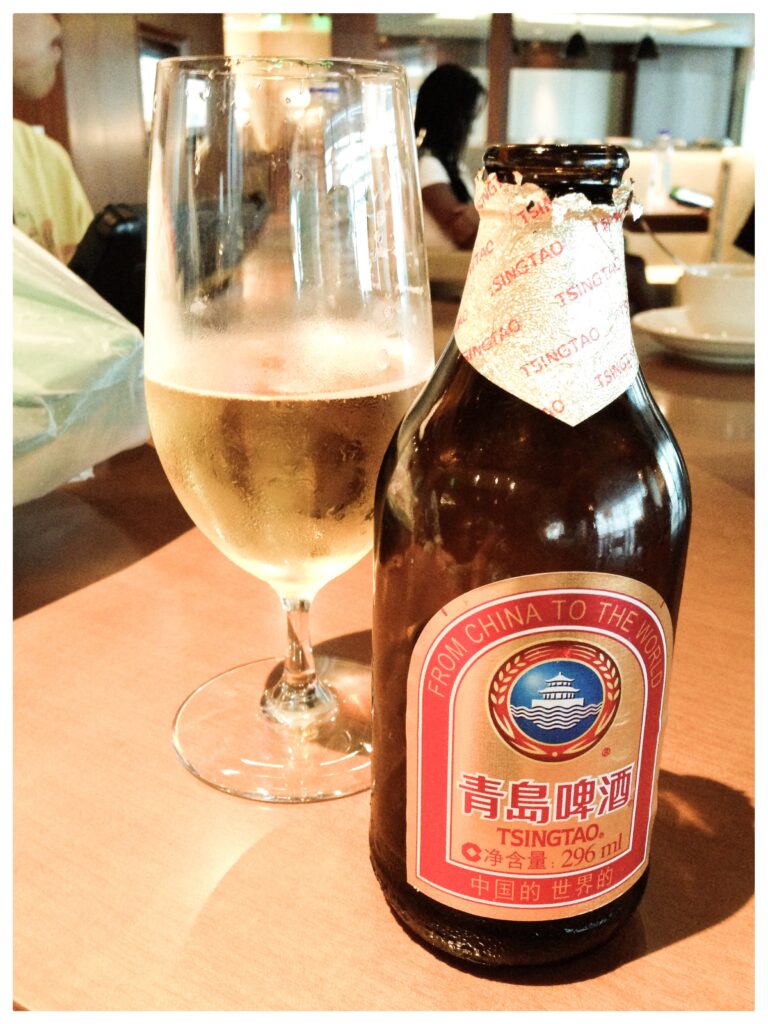 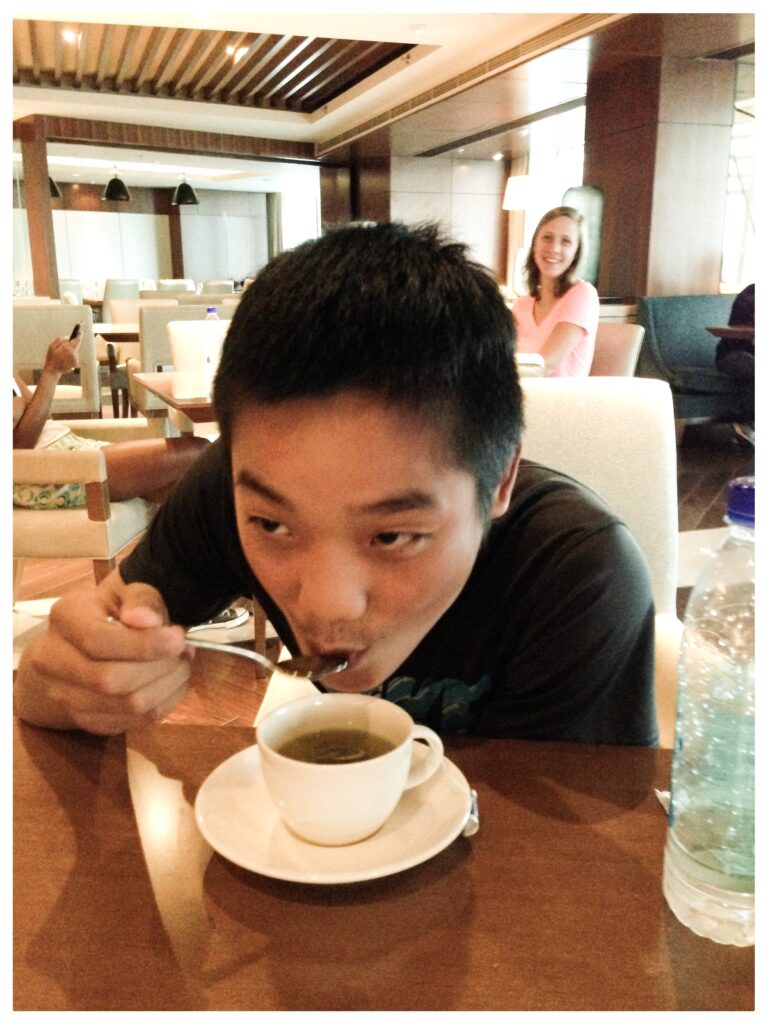 Cole falling prey to the delirium