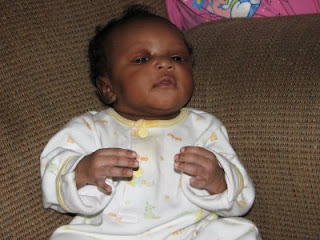 Several months ago someone passed this blog onto Cole. Little did we know how God would weave our paths together at that time. Here is the email I just sent to him explaining God’s handy work…..

On this day of Thanksgiving I wanted to share with you how God blessed me by allowing me to pray for your soon to be daughter and you (not knowing who her family would be) and then answering my prayers in an even bigger way by allowing me the joy of seeing her beautiful face and knowing that she will be in a loving home that will not only care for her physical needs but also her spiritual needs!

Earlier this year we felt the Lord calling us to a Down Syndrome adoption. Several circumstances arose but they needed homestudy ready families so we realized that we needed to get ready to be able to actually do anything. We have been homestudy ready since April. One of those situations was listed with Betty @ A Little Bit of Heaven. I have stayed on her email list to keep abreast of adoption situations and to see what doors God might open. Well, a few weeks ago I saw a situation posted from Alabama. They needed a family immediately since the baby was already born. I emailed Betty about the situation, told her she could pass on our homestudy and she gave me the contact info for Angel Adoption in Alabama, who were handling her adoption. That night they left a message that they had found a family. That night my husband got home before me and was shocked as he listened to the message that another family had been chosen for the baby, because all of this had transpired while he was in an all day meeting and he had no idea. Since a family was already found, there was no reason for us to discuss it or pray any further. Well, the next morning, Angel Adoptions calls me to tell me that the other family had changed their mind and we could come and get her two days later if my husband agreed. I couldn’t believe this scenario….. college educated birth mother and father, no drug or alcohol abuse, low fees since the mother had good insurance, but because of her skin color no families in Alabama were interested in adopting her. This was fresh off the Presidential election and all the “conservative christians” in the Bible belt were bashing Obama and his stance on abortion, etc. and yet this situation showed me the hypocrisy of their Pro-Life stance. These “conservative christians” are very vocal, but when it actually comes to caring for these children born from those crisis or unwanted pregnancies, there was no ACTION! Where is the church to care for them, regardless of skin color?!?!?

Cole was once again in an all day mediation so we were only communicating through an occasional email. Not exactly the communication you want to have with your husband while considering such a huge issue. It was all so fast and I felt so many emotions. With most adoptions you have several weeks or months to prepare and make plans and this was so fast….if you say yes, she can be in your home in 2 days…..WOW! It was such a dream adoption situation, and yet here I was questioning it. Why would God even put this perfect situation before us when we were prepared for a Down’s Syndrome adoption? My children were all very excited but I could not make the decision without praying over this face to face with my husband. I called Angel Adoption’s to see if I could let them know the following morning so that Cole and I could pray over it that night together. She said sure, but she also wanted me to know that the original family had called and had changed their mind and shared how God had changed their situation so that they could now adopt her. I said that she had just answered our prayer! That is their baby (they were believers with no children)! So, once again Cole and I go to bed without praying over wether or not this was our daughter. All weekend I prayed for that sweet girl and for the family adopting her. On Monday I called the agency to make sure everything had gone well and they told me the wife’s father had gone into the hospital over the weekend and since she is the one who would be caring for him they did not feel they could adopt her at this time with so many unknowns regarding his health. Once again, if we wanted her, she was ours. I knew she would easily find a family (outside Alabama) and ultimately the timing just was not right and we did not have the confirmation that this was God’s will for our family , as we have had with all of our other adoptions. With a broken heart and many children in tears I called and told Angel Adoption’s that she was not our daughter. She told me that she had been receiving homestudys all day but just waiting to hear back from us before going through them. I thought that would be the end of our journey involving this precious baby although I prayed that maybe one day God would allow our paths to cross and to see where He placed her and what His plan was for her life. I had no idea it would be so soon.

Someone had sent your blog to my husband a few months ago and he enjoys reading it periodically, but he’s not an avid blog reader. Well, guess what he found when he checked it last week?!?! He called me during my carpool rounds and casually mentioned that he thought he had found the Alabama baby. WHAT? Of all the families in the world that God could have placed her in, it just happens to be a family in New Mexico that my husband occasionally reads his blog…… What an awesome God we serve and I am so thankful to know she will be joining a family that fears the Lord and trusts His plan for their family. I look forward to following along and if you need anything while you are in Alabama picking her up, please contact me. We live in Montgomery and would love to meet you if you pass through during your time in Alabama.

Here is the link to his post about their adoption journey