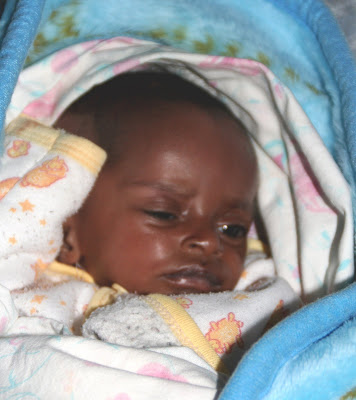 Emush was born August 3, 2006. Her mother brought her to CWA’s care center on September 8 , which is Cole’s Birthday!!! She was malnourished and at 2 1/2 months old weighed 6 1/2 pounds. Her father is deceased and her mother is homeless. She too is malnourished and could not produce milk for Emush. She was working for no pay just to provide milk for her baby, but she obviously had to make the tough decision to give up her baby so that they would both have a chance of survival.

Cole’s first response was, “can’t we just send her enough money to support them both?” Unfortunately that is not an option, but it’s even sadder to think of the millions of others in the exact situation. While there are many things that could happen between now and the time we travel, we have committed to adopt Emush (Emme) . We will wait and see if this is Gods will as well.

While on this adoption journey we have experienced many referrals that did not go through (other families) due to different factors (death, families changing their minds, can’t locate them etc) . I know we would grieve losing either of our daughters, but I rejoice in knowing God is sovereign and I want to do His will and not my own. My prayer throughout this entire adoption has been for Him to send the child/ren to us that He would have join our family and have prayed that he would disrupt this adoption if these children aren’t who he would have join our family. Until we have successful court dates, any number of things could happen. So, while we already feel they are a part of our family, God could still have other plans.

We hope to have a court date in early December and travel in January for the embassy appointment.